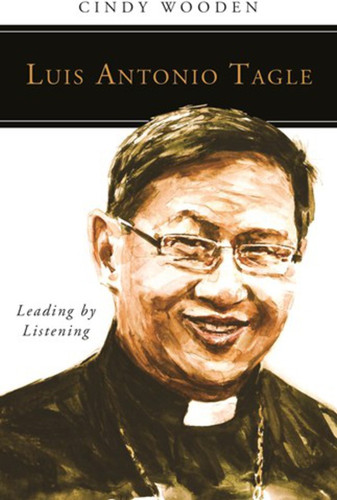 Cardinal Luis Antonio Tagle has been called "the Asian Pope Francis," because of his humility, his connectedness to the lives of everyday Catholics, and his insistence on the church's duty to care for the poor and the marginalized. In Luis Antonio Tagle: Leading by Listening, veteran Catholic journalist Cindy Wooden offers a poignant look at this archbishop of Manila who has impressed Catholics around the world.

At the world Synod of Bishops on Evangelization in 2012, he told his fellow bishops, "The church must discover the power of silence. Confronted with the sorrows, doubts and uncertainties of people she cannot pretend to give easy solutions. In Jesus, silence becomes the way of attentive listening, compassion and prayer. It is the way to truth." While not afraid to speak the truth to power, Cardinal Tagle also is not afraid to listen to the poor, the confused and the searching.

Wooden shares much insight into this man of deep faith and compassion, a pastor driven both to bring Christ to the people and to listen to the people in whom Christ lives and through whom he speaks.

Peek inside!
Written by Cindy Wooden

This book takes an insightful journey into the mind and heart of Cardinal Luis Tagle, one of Asia's youngest and most dynamic Catholic leaders and a figure who looms large on the church's horizon. It is a compact but revealing volume, with rich biographical detail and thought-provoking personal reflections. In Tagle's vision, the modern church must engage people through humility, simplicity and, as the book's subtitle states, "learning by listening."

As head of the Rome Bureau of the world's premiere English Catholic News Service, Cindy Wooden has written a brilliant biography of one of the great lights of the Post-Conciliar Church. Cardinal Tagle has said: `A person will always be deeper than any label. And no person, especially when talking about deep mysteries of love, marriage, relationships, can ever be labeled.' But when you finish reading Wooden's story of Chito, you cannot help but label him `good.' Cardinal Luis Antonio Tagle is a shepherd who not only has the smell of the sheep and the mind and heart of the Good Shepherd but the manner and courage of the Bishop of Rome. Of all the WITNESS interviews I have ever done for our TV network, the moments with Cardinal Chito were among the most powerful and beautiful.

Cindy Wooden's deeply researched and crisply written portrait reveals a compelling church leader in tune with his times, a son of Vatican II deeply enmeshed with his people, a scholar with the smell of sheep with a deep affinity for the young and poor. In his humility, austerity, accessibility and prophetic courage, "Chito" Tagle is the Asian emblem of the Francis pontificate-and the one to watch in coming conclaves.

Austen Ivereigh Author, The Great Reformer: Francis and the Making of a Radical Pope

Cindy Wooden is chief of the Rome bureau of Catholic News Service. She has been reporting on the Vatican and the Catholic Church since 1989. She has traveled around the world with John Paul II, Benedict XVI, and now Pope Francis. As a result of this work, she is respected around the world as an authority on the life and workings of the church. She is the author of Pope Francis: A Guide to God's Time.