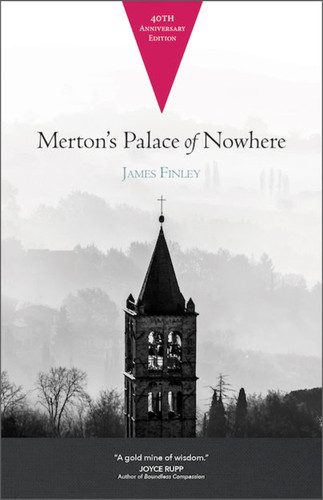 For forty years, James Finley’s Merton's Palace of Nowhere has been the standard text for exploring, reflecting on, and understanding the rich vein of Thomas Merton's thought. Spiritual identity is the quest to know who we are, to find meaning, to overcome that sense of “Is this all there is?” Merton’s message cuts to the heart of this universal quest, and Finley illuminates that message as no one else can.

As a young man of eighteen, Finley left home for an unlikely destination: the Abbey of Gethsemani, where Thomas Merton lived as a contemplative. Finley stayed at the monastery for six maturing years and later wrote this Merton’s Palace of Nowhere in order to share a taste of what he had learned on his spiritual journey under the guidance of one of the great religious figures of our time. At the heart of the quest for spiritual identity are Merton's illuminating insights—leading from an awareness of the false and illusory self to a realization of the true self.

Dog-eared, tattered, underlined copies of this book are found on the bookshelves of retreat centers, parish libraries, and the homes of spiritual seekers everywhere. This anniversary edition brings a classic to a new generation and includes a new preface by Finley.

Peek inside!
Written by James Finley

James Finley is a superb mentor of spiritual transformation. Merton's Palace of Nowhere contains a gold mine of wisdom. It is a book that will never leave my library. There are always more nuggets of spiritual growth in this book that wait for my discovery.

"This now-classic text celebrates its fortieth anniversary of publication on the fiftieth anniversary of Thomas Merton's death. In the intervening years, James Finley's poetic and insightful exploration of the true self and Merton’s many contributions to the spiritual life has proven an invaluable resource and guidebook. With this new edition, more readers will have the opportunity to accompany Merton’s former novice in learning to see themselves, the world, and God with renewed vision.

"Few people can write with as much authority on Thomas Merton as can his former student James Finley. Let Finley, in this new edition of his now-classic book, introduce you to one of the greatest spiritual masters of our age, and the man whose writings changed many lives, including my own.

May the clear and compelling message of this book encourage us all to follow along the authentic path of Christian discipleship."

The Road to Assisi The Essential Biography of St. Francis - 120th Anniversary Edition

The Sound of Music Anniversary Edition