Looking For the King An Inklings Novel 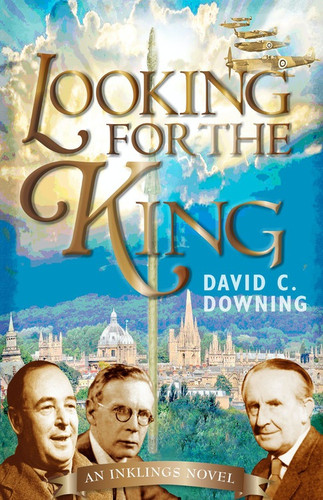 Looking For the King: An Inklings Novel

It is 1940, and American Tom McCord, a 23-year-old graduate student, is in England researching the historical evidence for the legendary King Arthur. There he meets perky and intuitive Laura Hartman, a fellow American staying with her aunt in Oxford, and the two of them team up for an even more ambitious and dangerous quest.

Aided by the Inklings — that illustrious circle of scholars and writers made famous by its two most prolific members, C.S. Lewis and J.R.R. Tolkien — Tom and Laura begin to suspect that the fabled Spear of Destiny, the lance that pierced the side of Christ on the Cross, is hidden somewhere in England.

From the wild opening to the surprising ending, Looking for the King is the story of a fearless quest that crosses paths with our most beloved authors. Lewis and Tolkien both crackle to life with wit and intelligence. Dr. David Downing’s prose delights and enchants as he asks and answers the important questions of our lives while also solving a great mystery. I felt as if I had walked into Oxford and then settled into the pub to spy on the Inklings in action — how grand! A novel you won’t want to put down, and won’t want to end.

David C. Downing is the Co-Director, with his wife Crystal, of the Marion E. Wade Center at Wheaton College. He is the author of four award-winning books on C.S. Lewis: Planets in Peril, The Most Reluctant Convert, Into the Region of Awe: Mysticism in C.S. Lewis, and Into the Wardrobe: C.S. Lewis and the Narnia Chronicles. Downing has also written short fiction for Christianity Today and other periodicals.

New Normal? Re-emerging from the Pandemic with the Flock

Written on My Heart Classic Prayers in the Modern World