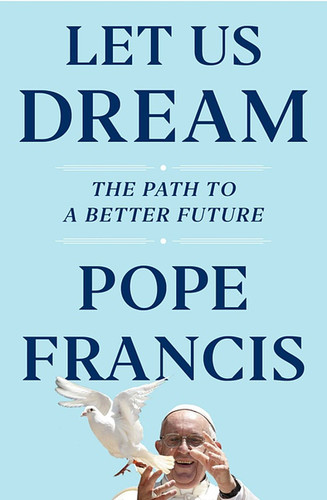 Let Us Dream: The Path to a Better Future

In this revelatory, uplifting, and practical book, the preeminent spiritual leader explains why people must--and how they can--make the world safer, fairer, and healthier for everyone now.ryone now. Jorge Mario Bergoglio was born in Buenos Aires, Argentina, on December 17, 1936, the son of Italian immigrants. He was ordained a priest in the Society of Jesus (Jesuits) in 1969 and made a bishop in 1992. He became Archbishop of Buenos Aires in 1998 and was named a cardinal in 2001. In March 2013 he was elected Bishop of Rome, the 266th pope of the Catholic Church.

In this uplifting and practical book, written in collaboration with his biographer, Austen Ivereigh, the preeminent spiritual leader explains why we must--and how we can--make the world safer, fairer, and healthier for all people now.

In the COVID crisis, the beloved shepherd of over one billion Catholics saw the cruelty and inequity of our society exposed more vividly than ever before. He also saw, in the resilience, generosity, and creativity of so many people, the means to rescue our society, our economy, and our planet. In direct, powerful prose, Pope Francis urges us not to let the pain be in vain.

He begins Let Us Dream by exploring what this crisis can teach us about how to handle upheaval of any kind in our own lives and the world at large. With unprecedented candor, he reveals how three crises in his own life changed him dramatically for the better. By its very nature, he shows, crisis presents us with a choice: we make a grievous error if we try to return to some pre-crisis state. But if we have the courage to change, we can emerge from the crisis better than before.

Francis then offers a brilliant, scathing critique of the systems and ideologies that conspired to produce the current crisis, from a global economy obsessed with profit and heedless of the people and environment it harms, to politicians who foment their people's fear and use it to increase their own power at their people's expense. He reminds us that Christians' first duty is to serve others, especially the poor and the marginalized, just as Jesus did.

Finally, the Pope offers an inspiring and actionable blueprint for building a better world for all humanity by putting the poor and the planet at the heart of new thinking. For this plan, he draws not only on sacred sources, but on the latest findings from renowned scientists, economists, activists, and other thinkers. Yet rather than simply offer prescriptions, he shows how ordinary people acting together despite their differences can discover unforeseen possibilities.

Along the way, he offers dozens of wise and surprising observations on the value of unconventional thinking, on why we must dramatically increase women's leadership in the Church and throughout society, on what he learned while scouring the streets of Buenos Aires with garbage-pickers, and much more.

Let Us Dream is an epiphany, a call to arms, and a pleasure to read. It is Pope Francis at his most personal, profound and passionate. With this book and with open hearts, we can change the world.

Austen Ivereigh is a writer, journalist, and commentator best known for two highly regarded biographies of Pope Francis: The Great Reformer: Francis and the Making of a Radical Pope and Wounded Shepherd: Pope Francis and His Struggle to Convert the Catholic Church.

Let Us Remember Stories of the Holy Presence of God

Families Past and Future