Lessons Learned Stories from a Lifetime of Organizing 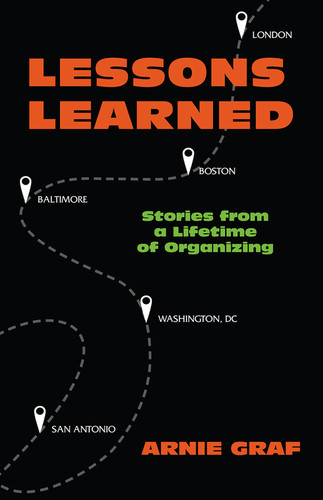 Lessons Learned: Stories from a Lifetime of Organizing

Arnie Graf has worked around the United States and in other countries to organize city, county, and metropolitan-wide non-partisan, institutionally based organizations that knit together multi-faith congregations, synagogues, mosques, and temples with local unions and various civic organizations and not-for-profit associations to amass enough power to both challenge and engage the corporate and political leaders in the communities in which they are based. At their best, they have forced changed laws and redirected large sums of money from the private sector and city, county, and state governments to address decades of neglected geographic areas and intractable problems. In this insightful and enjoyable memoir, Graf tells five substantive stories from his work in San Antonio, Baltimore, Washington DC, Boston, and London that illustrate the “universal principles” of organizing developed by the Industrial Areas Foundation (IAF), including power, self-interest, relational meetings, no permanent allies or enemies, breaking problems into issues, action in the reaction, the positives of tension, training and evaluation, and the necessity of people and their institutions to demand real respect and recognition rather than grudging tolerance in the public arena.

“Arnie Graf has proven, in wildly different settings, across more than four decades, that he is one of the truly brightest stars of organizing—a world class listener, a keen spotter of leadership talent, a subtle and deep trainer, and someone who is fearless and relentless in the arena of public action. If you want to understand how organizing is done at the highest level by a pro's pro, this is the book.” — Mike Gecan, author of Going Public and People’s Institutions in Decline

Arnie Graf was an organizer and supervisor with the Industrial Areas Foundation from 1971-1978 and 1980-2016. He served as its co-executive director from 2010-2012. Graf and his wife, Lucille, are the parents of four adult children and have six grandchildren. The couple now live in Ellicott City, Maryland, where Graf continues to write and mentor organizers and leaders.

Reflecting with Scripture on Community Organizing

Ancient Wisdom, Living Fire Lessons I Learned from the Fathers of the Church

Lessons from a Troubadour A Lifetime of Parables, Prose, and Stories

Born to Fly An Infant's Journey to God

How to Raise Money for Community Organizing

Mixing It Up in the Public Arena

Girl with the Green Hair

Reveille for a New Generation Organizers and Leaders Reflect on Power

Raising Money for Your Congregation