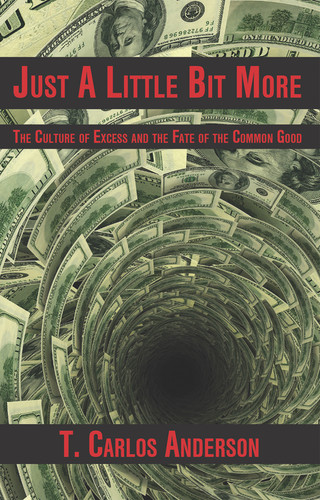 Just a Little Bit More: The Culture of Excess and the Fate of the Common Good

SKU:
UPC:
subtitle:
The Culture of Excess and the Fate of the Common Good
paperback:
true
title:
Just a Little Bit More
pricing:
$13.46

Is America a Christian Nation? According to author T. Carlos Anderson, the true religion of the land is the confluence of commerce, materialism, and consumerism. Anderson, defining religion as "ultimate concern," claims our true devotion is found in material pursuits. It's been a good religion; it has fed, clothed, sheltered, and employed millions of Americans. It can go too far, however. When these pursuits become excessive, the religion breaks bad and the common good suffers.

T. Carlos (Tim) Anderson works as a bilingual protestant minister in Austin, Texas. He has previously lived and worked in Chicago, Houston, and Lima, Peru.

Awakening Challenging the Culture with Girls

The Sacraments and Consumer Culture

#Rules_of_Engagement 8 Christian Habits for Being Good and Doing Good Online