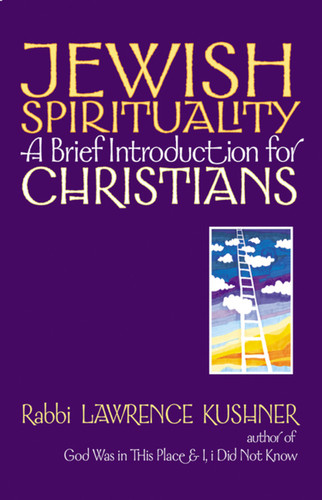 A window into the Jewish soul—written especially for Christians.

I invite you to explore with me some of the rich and varied expressions of the Jewish spiritual imagination. It is a tradition that may at times, for Christians, feel strangely familiar and will, for Christians and Jews, always challenge you to see yourself and your world through a new lens.

Jewish spirituality is an approach to life that encourages us to become aware of God’s presence and purpose, even in unlikely places. “This world and everything in it is a manifestation of God’s presence,” says Rabbi Lawrence Kushner. “Our challenge and goal is to find it and then act in such a way as to help others find it too.”

In this special book, Kushner guides Christians through the rich wisdom of Jewish spirituality. He tailors his unique style to address Christians’ questions, and, in doing so, opens new windows on their own faith.

Jewish Spirituality is a window into the Jewish soul that people of all faiths can understand and enjoy. From the Talmud and Torah, to “repentence” (teshuva) and “repairing the world” (tikkun olam), Kushner shows all of us how we can use the fundamentals of Jewish spirituality to enrich our own lives.

Rabbi Lawrence Kushner has a rare gift: He has unusual insight and the unusual ability to make them clear to others. His contribution to contemporary spirituality in the best of the Jewish tradition nurtures the soul in all of us. I read his work to understand my own roots better.

Joan D. Chittister, author of The Story of Ruth: Twelve Moments in Every Woman’s Life and other books

Eminently readable … his ministry transcends all faiths while deeply rooted in his own.

Explains complex ideas simply, plainly, and succinctly.... Anyone interested in learning about Jewish spirituality will enjoy this introduction.

We have another Buber here, a Heschel … Kushner expresses the truly profound with joy, lightness and humor.

Kushner has taught me more about God and my own Christianity than any other teacher I have known.

Lawrence Kushner, author, lecturer and spiritual leader, is regarded as one of the most creative religious thinkers and writers in America. A commentator on National Public Radio’s All Things Considered, he has focused us on spiritual renewal with wisdom and humor. Through his books and lectures, people of every faith and background have found inspiration and new strength for spiritual search and growth. It has been said that some spiritual leaders blend religion and psychology to help us walk better on the ground, but Lawrence Kushner draws on the wisdom of the mystics to help us dance better on the ceiling.

Kushner’s acclaimed books include I’m God; You’re Not: Observations on Organized Religion & Other Disguises of the Ego; Honey from the Rock: An Easy Introduction to Jewish Mysticism; Invisible Lines of Connection: Sacred Stories of the Ordinary; The Book of Letters: A Mystical Hebrew Alphabet; Jewish Spirituality: A Brief Introduction for Christians; and In God’s Hands, an inspiring fable for children, with Gary Schmidt (all Jewish Lights).

Kushner served as rabbi at Congregation Beth El in Sudbury, Massachusetts, for almost thirty years; he is currently the Emanu-El scholar at Congregation Emanu-El in San Francisco, and an adjunct faculty member at Hebrew Union College–Jewish Institute of Religion. He is fascinated by graphic design and computers (designing most of his Jewish Lights books). He enjoys Mozart, hanging around sailboats, and making his granddaughters giggle.

The Spirituality of Fasting Rediscovering a Christian Practice

Retreats Deepening the Spirituality of Girls