In Good Company The Fast Track from the Corporate World to Poverty, Chastity, and Obedience (Anniversary) 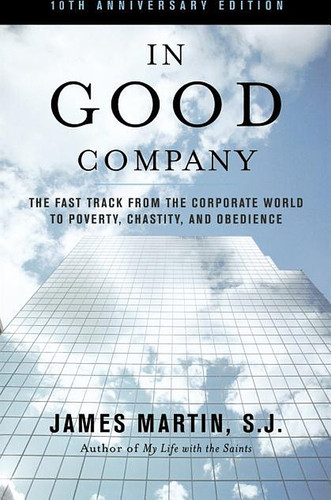 In Good Company: The Fast Track from the Corporate World to Poverty, Chastity, and Obedience (Anniversary)

"This engaging and entertaining book packs a double punch: the world of the Jesuits, which at first is unfamiliar if not downright mysterious, comes to seem a sane way of living in the world, while what we think of as the 'normal' world of corporate America is revealed as very strange indeed. James Martin has given us some savory food for thought." --Kathleen Norris, author of The Cloister Walk, Amazing Grace, and Acedia & Me

"An engaging account of his journey from successful businessman to vowed Jesuit . . . inviting, sane, grateful and gracious." --Christopher Ruddy

"Martin here presents a lively narrative of how he, a yuppie in the corporate world, found riches of a different kind by joining the Society of Jesus. A consummate raconteur with a keen eye for detail, Martin carries the reader along with his vivid prose and his ebullient humor. It's a book for just about everyone who can read." --Cardinal Avery Dulles S.J., Lawrence J. McGinley Professor of Religion and Society, Fordham University

"From the Wharton Business School and a secure place in corporate America to a $35-a-month allowance and the insecurity of a life of faith. This may seem a precautionary tale of downward secular mobility, but as we follow James Martin through his life and Jesuit training, we find it is all about ascent--to God and to true happiness." --Paul Wilkes, Author of In Due Season: A Catholic Life, and The Seven Secrets of Successful Catholics

"The story of James Martin's 'fast track' from GE to the Jesuits is confirmation, if any were needed, that God has a sense of humor. The pursuit of happiness is ultimately inseparable from the call to holiness. Martin has written a Seven Storey Mountain for a new generation of seekers." --Robert Ellsberg, author of All Saints: Daily Reflections on Saints, Prophets, and Witnesses for Our Time

"In Good Company tells this seeker's powerful story with humor and grace. The book's gems of wisdom will appeal to anyone seeking meaning in daily life. Fast-paced, compelling, and often humorous, his story offers a fresh, inside look at corporate America, the Jesuit vocation, and the human quest for a life well-lived." --Jesuits Of The Missouri and New Orleans Province

"Martin is both a natural storyteller and a self-effacing fellow, and he pairs that to fine effect in this honest and accessible story." --The Philadelphia Inquirer

"For all those considering a vocation, or needing a reminder about the vocation they chose, Father Martin's journey towards 'seeing life whole' is well worth traveling." --The American Spectator (London)

The New York Times has described James Martin as maybe "the only Jesuit priest with a degree from the Wharton School," and in the wake of our current economic crisis, the story of his remarkable journey from corporate America to the Society of Jesus couldn't be more timely. From the halls of General Electric under Jack Welch to his entry into the priesthood, In Good Company tells this seeker's powerful story with humor and grace. The book's gems of wisdom will appeal to anyone seeking meaning in daily life. Fast-paced, compelling, and often humorous, his story offers a fresh, inside look at corporate America, the Jesuit vocation, and the human quest for a life well-lived. This Tenth Anniversary Edition features a new preface by the author.

Prayers from Around the World and Across the Ages

My Life with the Saints Anniversary Edition