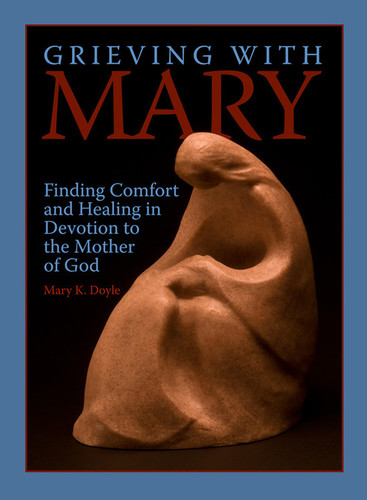 Grieving with Mary: Finding Comfort and Healing in Devotion to the Mother of God

More art, music and literature have been devoted to Mary than to any other woman in history, and millions of believers make hard pilgrimages to visit her shrines every day. But why do Catholics pray to Mary in times of sorrow or need? And how does she help them develop a closer relationship to Christ? In Grieving with Mary, author Mary K. Doyle finds comfort and healing in devotion to the Blessed Virgin. The heavenly mother cares deeply for her spiritual children, who go in supplication to her for love, support, and sometimes answers. Doyle walks readers through the illustrious history of the many ways Catholics have of approaching Mary, and encourages readers to use one or more of the following to nurture their own personal relationship with the Mother of God:

When Catholics pray to Mary (or any other saint), they ask for her intercession. The believer prays for help: Mary takes the plea before God. In prose that is clear and precise, Doyle makes clear that adoration of Mary does not replace worshipping God, but rather draws believers closer to God. Ultimately, devotion to Mary — in good times or bad — exhibits the amazing power of the unique mediation of Christ. Grieving with Mary includes an Appendix that offers Feast dates of the Blessed Virgin, Marian hymns and prayers, a glossary of terms, and a reference list of Marian religious and lay organizations. Also included are photographs from beautiful Marian shrines around the world.

Mary K. Doyle is an author, speaker, and freelance writer with nearly forty years of writing experience spanning the print, radio, cable television, and electronic media. Her published books include Grieving with Mary, Seven Principles of Sainthood Following Saint Mother Theodore Guerin, The Rosary Prayer by Prayer, and Mentoring Heroes, a winner of the National Publisher's Freedom Award Certificate for Excellence. Mary also is a contributor to newspapers and magazines, copywriter for large and small businesses and speaker on the topics of Mariology, St. Mother Theodore Guerin, Principles of Sainthood, and Mentoring.

Mary's personal relationship with Our Lady has been life-long. Research and her own personal spiritual quest have taken her to Marian shrines in Fatima, Portugal; Medjugorje, Bosnia-Herzegovina; Knock, Ireland; and Mexico City, Mexico. Wanting to substantiate her devotion with solid theology, she earned a Masters of Arts Degree in Pastoral Theology from Saint Mary-of-the-Woods College in 2005. She also attained a Bachelor of Arts degree in Business Management and Leadership with Highest Distinction from Judson University. Mary's other recognitions include the Margaret Naylor Liska Endowment Service Award and the Emerging Star Leadership Award from AAUW and a listing in Who's Who Among Students in American Colleges and Universities in 1998.

She is a member of the Ministers of Providence Professional Pastoral Service Organization, Catholic Press Association, the National Writers Union and an active member of St. Peter's Catholic Church in Illinois where she serves as a Eucharistic Minister.

Most of all Mary enjoys time with her family. She is married, has three adult children, a daughter-in-law, and four adult step-children as well as a large, supportive extended family. She accompanies her husband, magician Marshall Brodien, at magic conventions and special appearances where from time-to-time she assists him with his magic illusions on stage as a "box jumper."

Giving Thanks: Saint Theodora wrote, "When it is agreeable to your taste, thank God for it; when on the contrary you do not like it, still thank God . . ."

Mary in an Adult Church Beyond Devotion to Response

Blessed Are You Devotions for Mothers

Mary A History of Doctrine and Devotion

Grieving the Sudden Death of A Loved One

Growing as a Catechist A Practical Guide