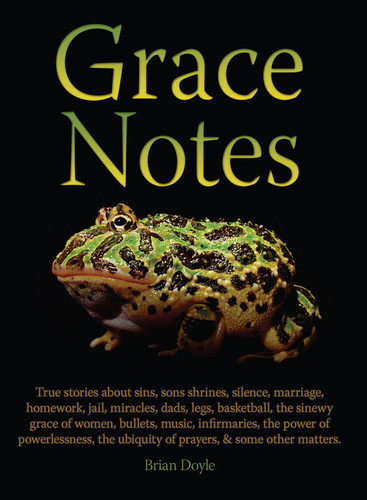 Brian Doyle might just be the most passionate storyteller in America. In this eclectic and compelling collection of stories Doyle writes about his discovery of the incarnated Spirit of God every time he turns around, often in the most unlikely of people, places, and things. In 37 short snapshots, he captures the spiritual essence of everyday life from the perspective of a committed Catholic who loves his faith, his family, his community, and his church, even with all their warts and failings. (Hence the beautiful Argentine tree frog that graces the cover.) Be prepared to take a beautiful, breathtaking, tear-jerking ride on some of the most accomplished, outside-the-box writing you've ever read.Attentiveness is the beginning of all prayer, says the great poet Mary Oliver, and everything that lives is holy, says the confusing poet Billy Blake, and all the way to heaven is heaven, says the tart Saint Catherine of Siena, and let grief be a falling leaf, says the testy poet Van Morrison, and grace under duress is the great story of us, says the undersigned muddleness, and how we reach for one another and listen to one another's music and share stories like the most amazing and nutritious food—that's what we are all here for. Me personally I think stories are the coolest wildest prayers there are. It's no accident that the skinny Jewish guy who wandered around Judea some centuries ago was a terrific storyteller, his tales mysterious and shimmering, wriggling their way through the millennia even unto our day, and now into the ears and hearts of our children and our children's children; stories matter, stories live forever, stories are how we shuffle quickest toward the Mercy greater than the ocean and denser than the stars in the sky. Stories maybe save lives. They sure saved mine. — Brian Doyle, from the Foreword

After the release of his first novel (Mink River) last year, Doyle, editor of the award-winning Portland Magazine at the University of Portland in Oregon, returns to the finely honed nature writing and memoir that three times earned him inclusion in anthologies of the Best American Spiritual Writing. This new montage of 37 short essays is like surf casting with a well-weighted jig into the cold, wild Pacific—you never quite know how deep you will go. In "The Genius of American Catholicism," he inquires, "Isn't belief that hope defeats despair a wild leap like the ones we take when we commit to marriage, to a vocation, to a tumultuous democracy?" With a fresh, relaxed, often humorous tone, Doyle provides an alluring mix of Annie Dillard's eye for mystery, Mary Oliver's contemplative paeans, and Kathleen Norris's unerring liturgical compass. But he doesn't shy away from harsh subjects: pornography, getting shot, and September 11. With two Pushcart prizes and a national award in literature, Doyle brings a steady hand to his craft. Even more delightful is the playful generosity he offers readers and his revival of a smart, invigorating American Catholic voice. (Oct.)

The Grace of Forgiveness