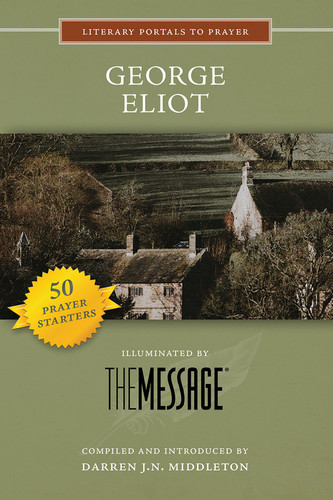 George Eliot, Illuminated by The Message is the tenth in the series Literary Portals to Prayer, each featuring excerpts from the work of a single literary giant paired with an illuminating quote from The Message: The Bible in Contemporary Language. For this volume, Darren J.N. has selected passages Eliot's work, including the following: Adam Bede; The Mill on the Floss; Silas Marner; Felix Holt: The Radical; Middlemarch; and Daniel Deronda

From the introduction by  Darren J.N. Middleton

In 1842, when she was still a young woman of twenty-three, George Eliot (the lifelong professional pen name of Mary Anne Evans) refused to accompany her father to church. He was devastated. They had recently moved to Foleshill, which is near Coventry, England, and here Eliot made friends with local intellectuals—so-called free-thinkers who encouraged her to read widely, think critically, and then doubt traditional Christianity. Eliot had deconverted. Or did she? Until recently, this story of spiritual disavowal has been the consensus view among Eliot scholars—that shortly after her refusal to worship she discarded her youthful Evangelicalism, worked to translate German philosophy as well as higher biblical criticism, and then embarked upon her successful—if controversial—literary career. Eliot gave up on religion, critics have argued across the decades, and she is not a religious writer, they declare. I disagree…

It is no secret that Eliot vetoed punitive Christianity, which imagines believers moving through life as though watched over by a rigorously moralistic God, always acting from fear or hope and feeling forever pursued by a dark, penitential cloud. When Eliot stopped attending church it was because she found it freeing, as well as necessary, to move away from an other-worldly conception of faith. Worshipping God as the heavenly lawgiver and judge who keeps precise records of offenses, however small, and will one day punish all violators, became untenable for her. Eliot left her church. But she never stopped praying. Her life’s supplication involved longing, however, for something different—something more expansive, more purposeful. Over time, Eliot tried to muster the courage to eschew a religion of personal reward and instead cultivate hope in a religion of humanity—an earthbound spirituality of caring for others rather than promoting or preserving oneself…

In Eliot’s religion of sympathy, reading and reflecting on literary art can be seen as a form of prayer, the lifting of the mind and heart to God, since instructive and edifying stories sometimes inspire us to abandon self-centeredness and mature into heightened consideration of others, including God, whom Eliot termed “the Mystery beneath the real.” Eliot’s third novel, Silas Marner, which she published in 1861, works in this somewhat strange and mystical way. When I first discovered how Silas transubstantiates the wrongs visited upon him by displaying his decades-long love for Eppie, the abandoned child of an opium-addled woman, his everyday and unassuming goodness astonished me. Silas’s story persuades me to leave my own life behind, albeit temporarily, and journey, in my mind’s eye, to think about goodness, our human condition, and the Mystery that dwells beneath or around everything that exists. Whatever else Silas Marner taught me, it revealed that God is the kindhearted original whose kindhearted image we remain. 4

Books may impart this sort of theological as well as moral wisdom. But do not take my word for it. Read Eliot for yourself. Begin with the short excerpts in this little book, which will show you that while she stopped attending church she never stopped thinking about God, reality, and our life’s true purpose in this distressingly insubstantial and frequently inscrutable world. Then read the related verses from The Message by the recently departed Eugene Peterson. They will illuminate Eliot’s texts and offer you new ways to appreciate them spiritually.

George Eliot was a religious rebel, a saintly outlaw, or a believing skeptic—unafraid to contest as well as probe conventional theology, even as she professed faith in “the Mystery beneath the real.” Sleuthing God’s mystery became Eliot’s life. And are we not all called to be just a little bit like her, the relentless and prayerful spiritual seeker, in this regard?