Expect More! Dare to Stand Up and Stand Out 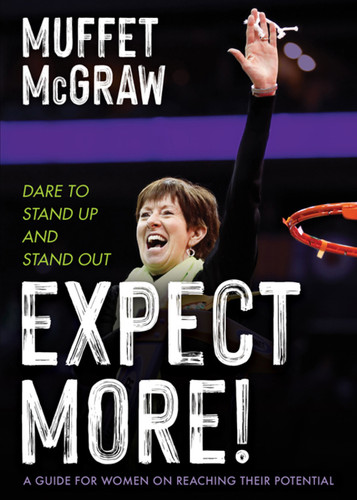 Expect More!: Dare to Stand Up and Stand Out

Muffet McGraw coached hundreds of amazing, smart, and talented young women in her thirty-three seasons as the head coach of the University of Notre Dame women’s basketball team, yet she says almost all of them struggled with their confidence. In Expect More!, McGraw motivates women to fly past all barriers that limit their confidence so they can attain the highest positions of leadership.

She wasn’t just talking about basketball.

In Expect More!: Dare to Stand Up and Stand Out, McGraw shares a bold message: It’s time for women to take a rightful and fair place in positions of leadership. In order to do that, she says, women should approach every opportunity not only with confidence but also with swagger. After all, “You can’t have success without confidence. And you can’t have swagger unless you are successful at what you do.”

McGraw came to leadership naturally through sports. Growing up in Philadelphia prior to the passage of Title IX—which sought equality in sports—she was often the only woman on the court with nine men.

Nevertheless, even well into her time at Notre Dame, McGraw found inequalities between her women’s team and the men’s teams on campus. “The men were flying to places and women were taking the bus.” she says. She felt it was her duty to the women she coached to speak out about the unfairness. By the end of her coaching career, McGraw was a leading spokesperson for women’s basketball and women in leadership.

In Expect More!, you will also hear some of the behind-the-scenes stories that helped to shape the success of McGraw and her Fighting Irish and her evolving role as a key figure at a university founded on male leadership.

While the book is primarily a guide for women to expect more in their careers and family lives, it’s also an important book for men, a primer to help them learn about how to partner with women in family life, how to raise the next generation of strong women, and to work for and with women who are in leadership positions in business.

Peek inside!
Written by Muffet McGraw

“Muffet McGraw does more than declare that women should have an equal seat at the table; she challenges and empowers us all to pursue that seat for ourselves!”

“It is no surprise that this book would be titled Expect More! because that is exactly how Muffet McGraw coached and how she led the Notre Dame women’s basketball program—powerfully, highly competitively, brilliantly, forcefully, and demandingly. She sharpened my drive to be the best by setting the example in the way that she lived her life. I am strong, I am successful, and I am powerful because of her.”

“Expect More! will empower you to lead with conviction and with a full heart.”

“Muffet McGraw has, in this insightful book, taken all of the lessons learned throughout her distinguished career and provided a guide to leadership and life that will be tremendously beneficial to rising women leaders as well as anyone committed to encouraging and empowering capable, confident women leaders.”

Understanding Paul and His Letters