Behold the Beauty of the Lord Praying with Icons 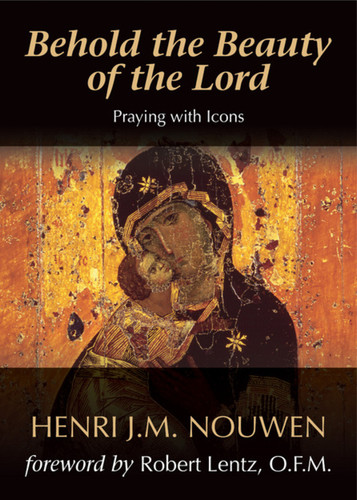 Behold the Beauty of the Lord: Praying with Icons

This twentieth anniversary edition (more than 111,000 copies sold) brings Henri J.M. Nouwen's writings on Eastern Orthodox icons to a new generation and adds to the Nouwen collection published by Ave Maria Press. With a foreword by Br. Robert Lentz, a well-known painter of contemporary icons, this classic Nouwen book invites readers to pray with four Russian icons with their eyes open by emphasizing seeing or gazing, which are at the heart of Eastern spirituality. Nouwen's meditations reveal his viewing of the icons not as decorations, but holy places. The book includes four full-color icons, which can be removed for private contemplation or meditation.

Henri J. M. Nouwen, who wrote more than 40 books, remains one of the most popular spiritual writers of our time. This paperback is a revised version of a volume released in 1987.... We are assaulted by images in a society where consumerism comes at us through posters, billboards, television, movies and store windows. But icons are a different thing completely. Nouwen presents meditations on four icons: the icon of the Holy Trinity, the icon of the Virgin of Vladimir, the icon of the Savior of Zvenigorod, and the icon of the Descent of the Spirit." (Read the entire review here.)

Heavenly Friends An Introduction to the Beauty of Icons

BeDADitudes 8 Ways to Be an Awesome Dad

Being a Grandparent Just Like Being a Parent ... Only Different

Becoming Catholic Even If You Happen to Be One

Becoming a Great Godparent Everything a Catholic Needs to Know