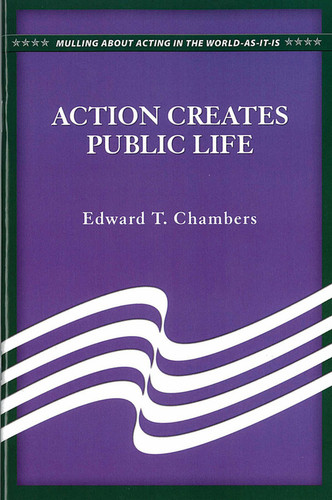 
In this booklet, Ed Chambers mulls about the need for human beings to develop their "Public life." He argues that it is by taking action that we define who we are as adults. Action Creates Public Life is about how our action in the world-as-it-is helps create the world-as-it-could-be. It is written for those who want to participate in Public life, not just sit around and complain about things or hide in their homes watching their TV sets.

Edward T. Chambers was a member of the Industrial Areas Foundation for fifty years and has served as its Executive Director since 1972. He taught a generation of organizers to value the local congregation both for its own sake and for its pivotal role in public life.

The Power of Relational Action

Abide in Love The Gospel Spirituality of John the Evangelist

A Spiritual Companion to Infertility

Adsum How to have a renewed personal encounter with Christ

A Teacher's Prayer Book to Know & Love Your Students