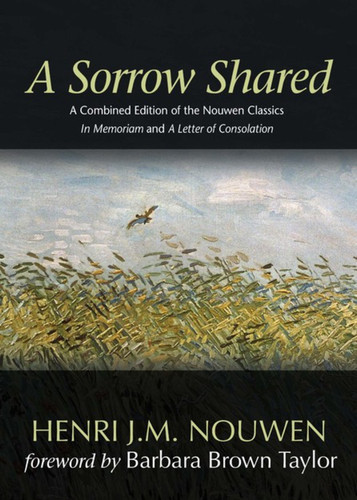 A Sorrow Shared: A Combined Edition of the Nouwen Classics In Memoriam and A Letter of Consolation

subtitle:
A Combined Edition of the Nouwen Classics In Memoriam and A Letter of Consolation
paperback:
true
min:
$10.46
title:
A Sorrow Shared
pricing:
$10.46 - $12.27

With combined sales of over 200,000 copies, Henri Nouwen’s classic works In Memoriam and A Letter of Consolation are put together in one volume for the first time in A Sorrow Shared, forming a Henri Nouwen biography of grief that offers an intimate glimpse into his grieving process following the death of his mother.

On the occasion of his mother’s death in 1978, Henri Nouwen wrote, “I want to reflect on this event because, although it is not unusual, exceptional, or extraordinary, it remains in many ways unknown and unfathomed. It is indeed in the usual, normal, and ordinary events that we touch the mystery of human life.”

In a first-ever combined English edition of Nouwen classics In Memoriam and A Letter of Consolation, this beloved spiritual giant of the twentieth century explores the depths of his grief and writes tenderly and wisely to his bereaved father, yearning for the light of Christ in the darkness of loss and sorrow. In Memoriam, Nouwen’s intimate, deeply touching account of his mother’s death, offers a gentle invitation to all those in grief to open themselves to a deeper sense of faith and trust in God. A Letter of Consolation—in which Nouwen writes to his father six months after his mother’s death—ponders the journey of bereavement itself.

The two books put together form a satisfyingly cohesive whole and depict a wise and honest wayfarer who guides and comforts his readers as they reflect on and struggle through similar experiences.

Since I first read both of these books while my own parents were still alive, I read them as messages in bottles, sent from an island I knew I would one day visit but that I hoped to stay away from as long as possible. Thirty years later I am sitting on the beach with both messages in my lap. The good news is that they are true, which means that they are also deeply consoling—even for those whose love is not this pure, whose faith is not this real—for Nouwen is right that we find comfort where our wounds hurt most, and he has never been afraid to meet us there."

Barbara Brown Taylor, Author of An Altar in the World

On the long road it’s good to have Nouwen and his divining rod. Deftly he bends toward the drop of spiritual wisdom caked in the most ordinary things."

Rivers of Sorrow, Currents of Hope

Advent and Christmas Wisdom from Henri J. M. Nouwen Daily Scripture and Prayers Together With Nouwen's Own Words

Our Parish at Prayer series A Prayerbook for the Grieving

A Teen's Game Plan for Life

A Spiritual Companion to Infertility

A Thrill of Hope The Christmas Story in Word and Art

A Treasury of Marian Prayers A Handbook of Popular Devotions

A Path Revealed How Hope, Love and Joy Found Us in a Maze Called Alzheimer's

A Poor and Merciful Church The Illuminative Ecclesiology of Pope Francis