A Pope Francis Lexicon Essays by Over 50 Noted Bishops, Theologians, and Journalists 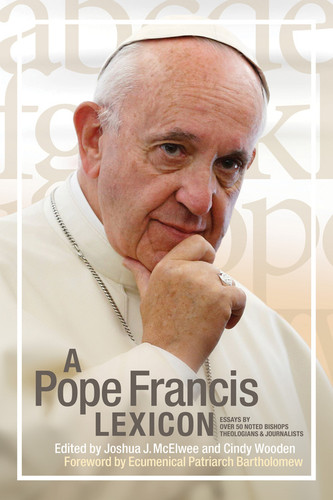 A Pope Francis Lexicon: Essays by Over 50 Noted Bishops, Theologians, and Journalists

A Pope Francis Lexicon is a collection of over fifty essays by an impressive set of insightful contributors from around the globe, each writing on a specific word that has become important in the ministry of Pope Francis. Writers such as Sr. Simone Campbell, Cardinal Blase Cupich, Cardinal Óscar Rodríguez Maradiaga, Fr. James Martin, Cardinal Luis Antonio Tagle, Anglican Archbishop Justin Welby, and Carolyn Woo explore the Pope's use of words like joy, clericalism, money, family, and tears. Together, they reveal what Francis's use of these words says about him, his ministry and priorities, and their significance to the church, the world, and the lives of individual Christians. The entire collection is introduced by a foreword by Ecumenical Patriarch Bartholomew, the spiritual leader of Orthodox Christians worldwide, and a preface by one of Francis's closest advisors, Cardinal Seán O'Malley.

This is no set of encyclopedia entries. It's a reflective, inspiring, and often heartfelt book that offers engaging answers to the question "What is this surprising Pope up to?" 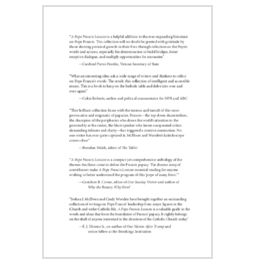 Peek inside!
Edited by Cindy Wooden and Joshua J. McElwee

This brilliant collection fizzes with the tension and tumult of this most provocative and enigmatic of papacies. Francis-the top-down decentralizer, the champion of the peripheries who draws the world's attention to the personality at the center, the blunt speaker who leaves exasperated critics demanding tidiness and clarity-has triggered a creative commotion. No one writer has ever quite captured it; McElwee and Wooden's kaleidoscope comes close.

A Pope Francis Lexicon is a helpful addition to the ever-expanding literature on Pope Francis. This collection will no doubt be greeted with gratitude by those desiring personal growth through reflection on the Pope's words and actions, especially his determination to build bridges, foster receptive dialogue and multiply opportunities for encounter.

This accessible, inspiring, and often entertaining collection is an invaluable resource for anyone seeking to understand the fullness and richness of Pope Francis' thought. I finished it inspired to get out into the field hospital and embrace our world with hope.

This new book is a must read in 2018! A real gem and key lexicon for understanding Pope Francis!

Gretchen R. Crowe, editor of Our Sunday Visitor and author of Why the Rosary, Why Now?

Joshua J. McElwee and Cindy Wooden have brought together an outstanding collection of writings on Pope Francis' leadership from major figures in the Church and wider Catholic life. A Pope Francis Lexicon is a valuable guide to the words and ideas that form the foundation of Francis' papacy. It rightly belongs on the shelf of anyone interested in the direction of the Catholic Church today.

E.J. Dionne Jr., co-author of One Nation After Trump and senior fellow at the Brookings Institution

What an interesting idea: ask a wide range of writers and thinkers to reflect on Pope Francis's words. The result: this collection of intelligent and accessible essays. This is a book to keep on the bedside table and delve into over and over again.

Cokie Roberts, author and political commentator for NPR and ABC

Cindy Wooden is chief of the Rome bureau of Catholic News Service. She has been reporting on the Vatican and the Catholic Church since 1989. She has traveled around the world with John Paul II, Benedict XVI, and now Pope Francis. As a result of this work, she is respected as an authority on the life and workings of the church. She is the author of Luis Antonio Tagle: Leading by Listening.

Joshua J. McElwee is National Catholic Reporter's Vatican correspondent and a contributor to the Italian news website Vatican Insider. He has reported on Pope Francis from 23 countries and his work has earned numerous awards from the Catholic Press Association. He is the author of Ten Things Pope Francis Wants You to Know About the Family.

Our Parish at Prayer series A Prayerbook for the Grieving

A Path Revealed How Hope, Love and Joy Found Us in a Maze Called Alzheimer's

A New Examination of Conscience The Divine U-Turn

A Month of Mondays Spiritual Lessons from the Catholic Classroom