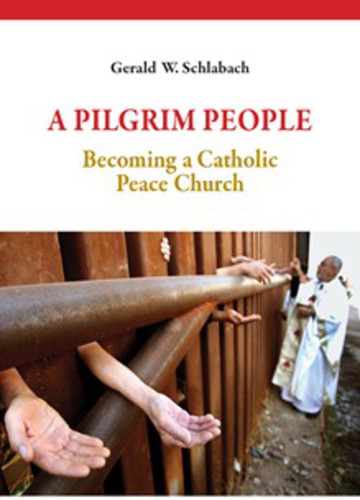 Recent decades have seen a steady trend in Roman Catholic teaching toward a commitment to active nonviolence that could qualify the church as a "peace church." As a moral theologian specializing in social ethics, Schlabach explores how this trend in Catholic social teaching will need to take shape if Catholics are to follow through. Globalization, he argues, is an invitation to recognize what was always supposed to be true in Catholic ecclesiology: Christ gives Christians an identity that crosses borders. To become a truly catholic global peace church in which peacemaking is church-wide and parish-deep, Catholics should recognize that they have always properly been a diaspora people with an identity that transcends tribe and nation-state.

“A Pilgrim People is a book rich in experience and practical advice organized around the urgency of the Catholic church’s committing itself to non-voilence.”

"General secretaries of Global Christian Communions often discuss the ongoing need for a theological framework for the existence, form, ethics, and structure of a global church. In this book, Gerald W. Schlabach offers an important contribution to that need: a global (catholic) ecclesiology. Based on the church fathers, the councils, theologians, and popes of the Roman Catholic church, Schlabach invites us to respond to the magisterial call by living as pilgrim people—being a transnational and cross-cultural diaspora in constant exile—and becoming a catholic peace church. An excellent project and a fascinating call!"

"From his deep experience in both Mennonite and Catholic circles, Gerald Schlabach explores well the transforming initiative of the Church's evolving `turn to active nonviolence' and offers a challenging reflection on the messy complexity of the just war framework's `traditional righteousness.' This book should be required reading for all of us involved in the Catholic Nonviolence Initiative."

"More than any book on active nonviolence and peace-making, Gerald Schlabach's A Pilgrim People offers a profound and solid theological foundation for this essential Christian mission. It shows that active nonviolence is demanded not only by the process of globalization but also, and more urgently, by Christ's command to his disciples to cross borders of all types to bring about God's reign of justice, peace, and love. It is a must-read for social activists as well as scholars. A timelier book for our Age of Migration can hardly be found."

Gerald W. Schlabach is professor of theology and former chair of justice and peace studies at the University of St. Thomas in Minnesota. He holds a PhD in theology and ethics from the University of Notre Dame. During much of the 1980s he worked in Central America on church-related peace and justice assignments. Schlabach is co-founder of Bridgefolk, a movement for grassroots dialogue and unity between Mennonites and Roman Catholics. He is active in the Catholic Nonviolence Initiative, which is engaged in a sustained conversation with the Vatican in favor of a "just peace" framework for Catholic teaching and practice. His books include Just Policing, Not War: An Alternative Response to World Violence, and Sharing Peace: Mennonites and Catholics in Conversation, both from Liturgical Press.

The Way of Spiritual Direction

The Gospel and Epistles of John A Concise Commentary, Revised Fourth Edition

Exposition on the Song of Songs

Alive in the Word Eucharist Bread of Life

Alive in the Word Empty Nest Time for Letting Go

Alive in the Word Christmas Season of Wonder and Hope

Return to the Lord