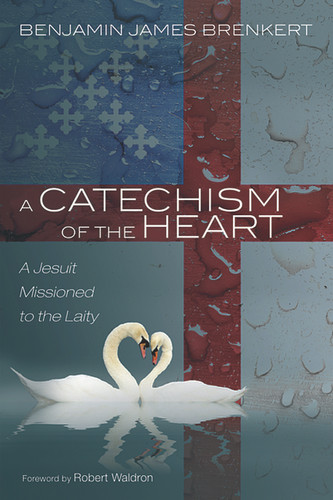 At the age of twenty-five, Benjamin James Brenkert--a young man from Long Island, a social work student, and an internet vocation to the priesthood--entered one of the historically boldest, influential, apostolic religious orders of the Roman Catholic Church. Aged thirty-four, and a member of the Society of Jesus (the Jesuits) in good standing, Brenkert was missioned to the laity by his last religious superior. Brenkert could not come out publicly as a gay Jesuit and support his LGBTQ peers who were being fired from various church employment and volunteer activities because of whom they loved.

Brenkert had never concealed his sexuality from his religious superiors, he knew all too well what was written in the Church's Catechism about homosexuals. Still, he felt uniquely called to respond to God's invitation to serve him in total love as a priest, something confirmed in him in prayer during his thirty-day silent retreat and affirmed to him by his religious superiors and peers throughout his life in the Jesuits.

In his Open Letter to Pope Francis in 2014 Brenkert wrote, ""Pope Francis . . .I ask you to instruct the United States Conference of Catholic Bishops to tell Catholic institutions not to fire any more LGBTQ Catholics. I ask you to speak out against laws that criminalize and oppress LGBTQ people around the globe. These actions would bring true life to your statement, 'Who am I to judge?'"" In 2015, the United States Supreme Court struck down bans on same-sex marriage in Obergell v. Hodges and in 2020, the United States Supreme Court expanded the Civil Rights Act of 1964 to include discrimination based on sexual orientation and gender identity. Despite these landmark achievements in the public sector, LGBTQ Catholics still cannot receive communion and must always seek reconciliation. Their flourishing as part of their religious community is always frustrated.

Brenkert's account of his life before, in, and after the Jesuits is interwoven with trials and tribulations, but remains always full of hope, written candidly and with bracing honesty. Brenkert offers readers the opportunity to join him on a theological and spiritual pilgrimage, one that ends with readers making a discernment. The world today is full of distraction, misinformation, and timidity, Brenkert's pilgrimage is full of conviction, heartful, written with an eagerness to help people of faith and no faith at all find their true selves, all for the greater glory of God.

A Catechism of the Heart speaks candidly and truthfully about the desire to be an openly gay Jesuit priest. This book speaks not only candidly about the hurt, but also about the resiliency and dedication of gay Catholics in the quest to serve their church as ordained priests. I highly recommend it.

One man's painful journey to harmonize sexuality and faith reaches a breaking point, not because of how he is treated by parts of the Roman Catholic Church, but in how church institutions treat other committed and faithful LGBTQ members. This book is insightful, angry, self-deprecating and, at times, very amusing. An original memoir which shows, above all, how one relies on acceptance from others before one can aspire to genuine self-acceptance.

Benjamin Brenkert's book, A Catechism of the Heart, is a must-read for those who care about the future and relevance of the church in society. Brenkert is a wise guide as he seeks not to denigrate the church; rather, he helps us all negotiate the healing of controversies in the church and society that so often appear as closed doors to human beings.

Through all the bracing honesty of this moving memoir--its searing exposure of the homophobia of Roman Catholic teaching--the most impressive aspect of this book is the sheer spirituality of Brenkert. His confession reveals a closeness to God and Jesus that is breathtaking. I found myself moved to jealousy by his love for God and desire for Jesus. In pain, irresistible love."" --Dale B. Martin, Woolsey Professor Emeritus of Religious Studies, Yale University, and author of Sex and the Single Savior ""Brenkert's confession is a story of faith, family, and freedom told with sincerity, sensitivity, and an uncensored memory. It is also the story of a generation coming to terms with sexuality in ways that would force historical changes in the structures of social norms. This song of self is beautifully told, inviting the reader to share a journey of blindness and insight, guided by a search for personal awareness and unwavering commitment to love.

Catechism of the Catholic Church with Theological Commentary

The Seeker's Catechism The Basics of Catholicism