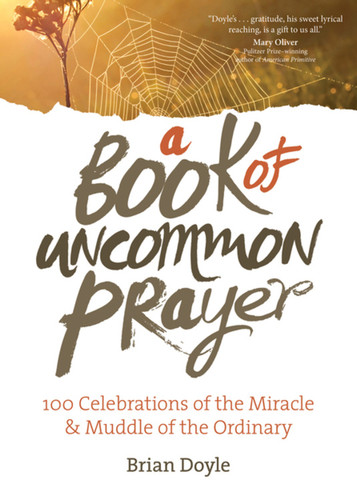 A Book of Uncommon Prayer: 100 Celebrations of the Miracle & Muddle of the Ordinary

SKU:
UPC:
subtitle:
100 Celebrations of the Miracle & Muddle of the Ordinary
paperback:
true
title:
A Book of Uncommon Prayer
pricing:
$14.95

Acclaimed, award-winning essayist and novelist Brian Doyle—whose writing, in the words of Mary Oliver, is “a gift to us all”—presents one hundred new prayers that evoke his deep Catholic belief in the mystery and miracle of the ordinary (and the whimsical) in human life.

In Doyle’s newest work, A Book of Uncommon Prayer: 100 Celebrations of the Miracle & Muddle of the Ordinary, which was named "A Best Spiritual Book of the Year" by Spirituality & Practice, his readers will find a series of prayers unlike any of the beautiful, formal, orthodox prayers of the Catholic tradition or the warm, extemporized prayers heard from pulpits and dinner tables. Doyle’s often-dazzling, always-poignant prayers include eye-opening hymns to shoes and faith and family. In Doyle’s words, “the world is crammed with miracles, so crammed and tumultuous that if we stop, see, savor, we are agog,” and the pages of his newest book give voice and body to this credo. By focusing on experiences that may seem the most unprayerful (one prayer is titled “Prayer on Seeing Yet Another Egregious Parade of Muddy Paw Prints on the Floor”), he gives permission to discover the joys and treasures in what he often calls the muddle of everyday life.

Peek inside!
Written by Brian Doyle

“Brian Doyle’s writing is driven by his passion for the human, touchable, daily life, and equally for the untouchable mystery of all else . . . [H]is gratitude, his sweet lyrical reaching, is a gift to us all.”

Pound for pound, Brian Doyle is the best writer of spirituality in Catholicland, and I doubt if any writer can match him in any land. These amazing prayers -- in thanks for decent shoes, for cashiers and checkout counter folks, for the reader who photocopies this prayer and shares it with friends and sisters -- and so much more, are where the rubber meets the road. This is Brian Doyle's time, and your time to read his wonderful books if you haven't before. A Book of Uncommon Prayer is a great place to start."

Michael Leach
Author of Why stay Catholic? Unexpected Answers to a Life-Changing Question

“To read Brian Doyle is to apprehend, all at once, the force that drives Mark Twain, and Walt Whitman, and James Joyce, and Emily Dickinson, and Francis of Assisi, and Jonah under his gourd. Brian Doyle is an extraordinary writer whose tales will endure.”

“Brian Doyle has a fine quick mind alert for anomaly and quirk--none of them beyond his agile pen.”

Handbooks for Parish Ministers series Handbook for Extraordinary Ministers of Holy Communion Reflections, Prayers and Practices for Your Journey in Ministry

The Little Angels Book of Prayers

The Notre Dame Book of Prayer

70 Prayer Starters for Children ...and those who teach them

A Book of Saints for Catholic Moms 52 Companions for Your Heart, Mind, Body, and Soul

A Church in Motion Reflections on Contemporary Catholic Life

52 (Good) Reasons to Go to Church Besides the Obvious Ones