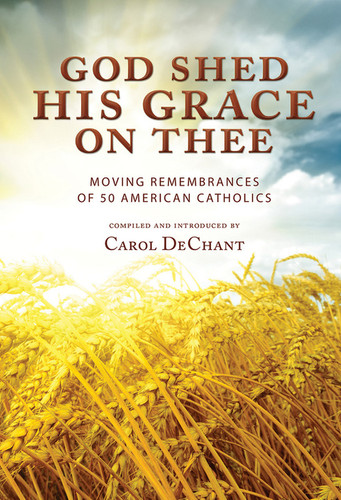 From sea to shining sea, Catholics have been an important part of the fabric of American life. Some of them were famous, some toiled in obscurity. They included musicians, military leaders, writers, elected officials, visual artists, poets, athletes, reporters, movie stars, and people who worked a lifetime for justice. A few were saints or heroes, most were ordinary people who lived extraordinary lives. Some worked directly for the church, most did not. This award-winning collection of fifty tributes forms a patchwork quilt of exceptional insight, historical context, and inspiring example. Those who gave these remembrances (not all Catholics themselves) were often as interesting as the people they praised, for example Ronald Reagan on John F. Kennedy, Grantland Rice on Babe Ruth, Phil Donahue on Danny Thomas, Robert Louis Stephenson on St. Maryanne Cope, Katherine Anne Porter on Flannery O’Conner, Rabbi Haskel Lookstein on John Cardinal O’Connor, Tom Wolfe on Frederick Hart, Maria Schriver on Tim Russert, John Keats on Thaddeus Kosciuszko, Jim Forest on Dorothy Day. The remembrances span the American experience, from those who were born before the Declaration of Independence was written to a modern sports legend, from pioneers in social justice, healthcare, and the arts to founders of distinctly American religious orders, and from all the varied ethnic cultures who contribute to the great cultural milieu that is the United States. Those remembered in this volume include:

Once I opened it, I was hungry for more. The book is about heroes, role models, mentors, and leadership. It’s about hope, love, and living a life of faith. It notes the best in humanity and offers a level for us to reach for.-- Mary K. Doyle (Read full review)

This book was published in an earlier version under the title Great American Catholic Eulogies.

Carol DeChant shares ACTA's penchant for both religious thought and baseball. As a child she attended Visitation School in Des Moines and Iowa Cubs games, establishing a lifetime team loyalty (with a brief defection to Kansas City when the Royals had George Brett and poet-pitcher Dan Quisenberry).

Carol's new book, Great American Catholic Eulogies, also reflects her interest in story telling, dating back to graduate work in folklore at Creighton and Kansas Universities. The book offers a spectrum of American Catholic history, through "stories" about men and women of every era since the American Revolution. These lives are revealed by their eulogists and in prefaces Carol wrote for each tribute, to place the subject in his or her era.

The deceased represent a broad range of American-Catholic ethnicity, whose contributions were in social, public, church or military service, or through art, music, literature, media, and even baseball. The book reintroduces them to readers who may have forgotten—or never known—the extent of how Catholics left their mark on America.

Carol has also contributed chapters to ACTA's Diamond Presence and Christmas Presence collections, and her articles have appeared in the Miami Herald and in Chicago's Tribune and Sun-Times.

After graduating from Drake University with a journalism major, Carol worked on the Kansas City Diocesan newspaper (after its predecessor, The Catholic Reporter, relocated to New York as a national independent paper). The new local paper also exceeded diocesan comfort zones, however; and after it was shut down, Carol became an editor and film critic at a suburban newspaper chain. Her screenplay, Pure Beholding, had a brief happy life as first place winner in a Texas screenwriting competition before dying peacefully, never produced.

Carol and her husband Stan Reinisch vote in the Florida county where 527 votes decided the 2000 presidential election; they spend hurricane season in Evanston, IL. Their ten grandchildren come and go.

Peek inside!
Written by Carol DeChant
×

American Catholic Experience Finding My Way in a Grace-Filled World

The Thorny Grace of It And Other Essays for Imperfect Catholics

Cravings A Catholic Wrestles with Food, Self-Image, and God

God Will Provide How God's Bounty Opened to Saints and 9 Ways It Can Open for You, Too

God's Word Is Alive Reflections on the Sunday Readings for Years A, B, and C

Go in Peace You Are Sent