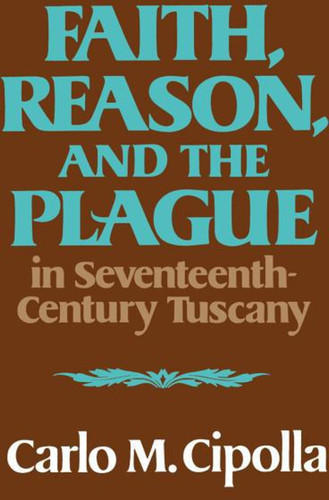 Recreates the struggles within plague-stricken Italy, relating events that led to a confrontation between the advocates of science and the followers of faith. By the late fall of 1630, the Black Plague had descended upon northern Italy. The prentice Magistry of Public Health, centered in Florence, took steps to contain and combat the scourge. In this essay, Carlo Cipolla recreates the daily struggle of plague-stricken Monte Lupo, a rustic Tuscan village, revealing in the vivid terms of actual events and personalities a central drama of Western civilization - the conflict between faith and reason, Church and state.

In response to the visitation of disease, this new class of medical professionals and administrators was urging the population to self-quarantine to avoid the spread of infection, while local priests, who largely had control of the population, were saying, ‘This is an act of God; to ward off the plague we need to come together for a mass.’

These forces were completely at odds with one another. One is suggesting, based on empirical evidence, that people need to separate themselves. The other one is saying that to stop the plague we must come together and praise God. Cippolla shows how these questions of faith and reason, as he puts it, created enormous conflicts.

What Keeps Us Catholic? 40 Reasons to Feel Good about our Faith

Your College Faith Own It!

Word of the Week - 2020 Year A One-Page Bulletin Inserts with Cartoons, Reflections, and Questions of the Week

All Are Welcome Here Practicing Christ’s Call to Hospitality

Unemployed Together during the COVID-19 Shutdown Six Small Group Sessions