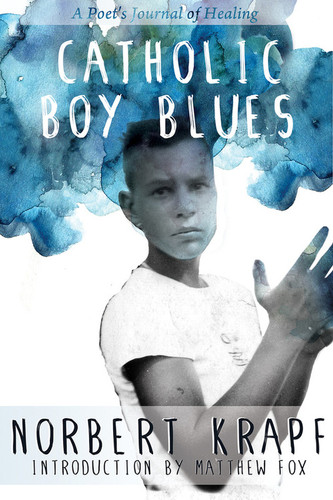 A look into the lifelong effects of child abuse by a past State Poet Laureate, Pulitzer Prize nominee, and author of over twenty-five critically acclaimed books. You will be introduced to an extraordinary man who, at the age of seventy, had the courage to share his experiences as a child who suffered abuse at the hands of his priest.

Norbert Krapf speaks in four voices, the boy, the man, the priest, and Mr. Blues. Indiana Poet Laureate 2008-10, Krapf has for almost fifty years had an ongoing love of the blues. In his last several collections, completed or published while he held a Creative Renewal Fellowship from the Arts Council of Indianapolis to combine poetry and music, with an emphasis on the blues, he often pays tribute to blues artists. In Catholic Boy Blues, Mr. Blues plays an important role in several ways, not the least of which is as an agent of healing. He speaks in the blues idiom, in dramatic lyrics delivered in the voice of a friend, advisor, counselor, and mentor.Catholic Boy Blues is a brutally honest narrative filled with words of biting truth, painting explicit images of the effects of abuse. These words detail Norberts lifelong journey and show how abuse affected the various stages of his growth. This verse journal is both timely and newsworthy. It is a compassionate anthem directed to those struggling with their own abuse. It provides clarity to those who have never had to experience the indignity of abuse and affirms that healing and success can be achieved despite adversity. The book will appeal to survivors of abuse and their families and friends; the church and its members, clergy, and hierarchy who have an ongoing interest in the emotional, spiritual, and religious effects of child abuse and its prevention; and caregivers and others interested in knowing how to detect early signs of abuse.

The priest took the cover photograph of Norbert as a boy in the 1950s, during the abuse period, and gave it to his parents. There are four poems in the book, at various stages of the recovery process, in which the author reflects on the priests possible motivation(s) in saving and presenting this photo and ponders what implications a viewer may find hidden and/or revealed in it. In Photo Postscript from the Priest, the abuser says: It is as if / I am trapped / inside the image / I made of you.

Rev. Michael OMara of Indianapolis says, It has been a spiritual journey to walk with Norbert Krapf through this dark night. His courage to share this journey with us will be a resource for others who have experienced abuse and for their caregivers. Publishing this book required a lot of strength and prayer, and the Holy Father should have a copy.

Catholic Boy Blues is a narrative and dramatic cycle in four sections that take the reader on the long road from childhood abuse to a vision of healing.

The first section grows out of the authors awakening to the fact and recall of details and implications of his sexual abuse by a priest over fifty years earlier and the discovery that many other boys in his parish were also victims. The second section revisits the traumatic experience of fifty years ago from the perspective of the adult man who has reflected upon the abuse and begun the process of healing, partly through dialogue between the boy he was and the man he has become. Section three returns, after the reconciliation between the boy and man, to the scenes, events, and consequences of section one, in poems addressed to the priest-victimizer. In four, the priest, dead for twenty years, tries to defend and justify himself, as the boy speaks back with a new-found confidence and righteous anger. Four voices speak in the autobiographical poems, sometimes two or three in a single lyric: The Man who looks back; The Boy victim he was; Mr. Blues, an elder practiced in the performance and wisdom of the twelve-bar blues who counsels the boy and the man, commenting on the situation like a Greek chorus; and The Priest, who twenty years after his death denies or struggles to admit to the implications of the trust he betrayed and the moral values he corrupted.

To read Catholic Boy Blues is to enter into the pain and confusion of an abused child and the despair and anger of an adult man. It has been a spiritual journey to walk with Norbert Krapf through this "dark night." His courage to share this journey with us will be a resource for others who have experienced abuse and for their caregivers. Publishing this book required a lot of strength and prayer, and the Holy Father should have a copy.

Norbert Krapf has used first-hand experience to provide space for the millions of boyvoices from which we have not yet heard; voices we have always wondered aboutchildminds we have never been able to bring ourselves to invade for the selfish fear that we will not be able to handle the hurt we find, nor handle the resulting guilt well feel for the white horse we, out of ignorance, never rode. In offering the boychild/presentman a place to speak, release, a chance to be reborn: fresh, clean, newly pureKrapf has provided a powerful and necessary service for the powerless back-in-the-day victimnow free and clear of the past, appreciably in control of the present, anticipative and open to a secure, wholesome future. Catholic Boy Blues is a gem.

Mari Evans, author of I Am a Black Woman

Catholic Boy Blues is a significant book not just because of its subject matter. It will be a great comfort to men and women who were abused, to the families of such victims, but also to the great body of Catholics who have faith in the church and its priests and are ashamed of the failure of the church leadership to confront the abusers, to level with the victims and their families, and to admit their complicity in the cover up. It is ironic that something called the Blues can rejuvenate the human spirit.

These searing, savage, heartbroken, fearlessly naked poems take us into the depths of the agony that early sexual abuse causes and explore the fiery alchemy that leads from brutalized silence to molten outrage to forgiveness. This is a major work which deserves the widest readership throughout the Catholic Church and far beyond.

Andrew Harvey, author of The Hope: A Guide to Sacred Activism

Take, eat, for this is the body of the blues. And drink the spirit of these sublimethe sublime as opposed to the merely beautiful has terror in itand hardwon painsongs sung in communion with and compassion and advocacy for all the haunted and wounded, the innocent defiled ones who now have their voices. Norbert Krapfs Catholic Boy Blues is a poetry of trauma and trembling faith.

William Heyen, author of Shoah Train and A Poetics of Hiroshima

Catholic Boy Blues is a kaleidoscope of memory. The poet arranges the shifting scenes of his thought field with a spiritual voice that hums like a sound track. Norbert Krapf fuses the rolling wisdom of blues singers with incantations of his own past that echo sacred ritual. Along the way he turns trauma into elegy, and takes suffering to a plateau of human triumph.

Jason Berry, author of Lead Us Not into Temptation: Catholic Priests and the Sexual Abuse of Children

Norbert Krapf shares the truth with unique clarity, empathy, and honest grace. The poet that he has always been, even when he was a boy betrayed by a priest, speaks directly to the heart. Read and understand.

Side by Side A Catholic Mother-Daughter Journal

Be Yourself A Journal for Catholic Girls

The New Day Journal A Journey from Grief to Healing

Catholic and Mourning a Loss 5 Challenges and 5 Opportunities

Catholic and Grandparenting 5 Challenges and 5 Opportunities