A Gathering of Angels Seeking Healing after an Infant's Death 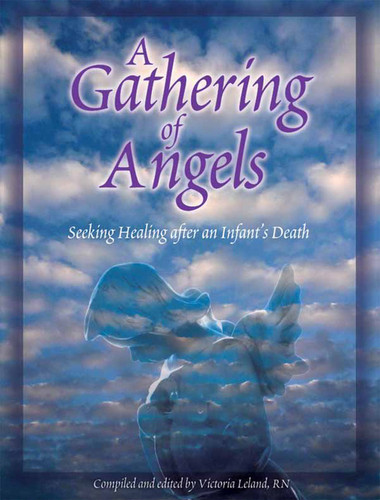 A Gathering of Angels: Seeking Healing after an Infant's Death

Beginning in 2006, Neonatal Intensive Care nurse, Victoria Leland, RN, found her life remarkably intertwined with five mothers whose premature babies died in her NICU. After she witnessed each of these mothers struggle alone in grief, Leland brought these women together and created an informal support group, which they fondly called their "Good Grief Group." Their regular gathering, sharing, and volunteerism immensely helped each woman, and also helped them become "angels" to others experiencing the heartbreak of infant death.

Inspired by their stories, Leland compiled A Gathering of Angels, a collection of the wisdom these five mothers gained by opening their hearts and sharing their feelings and experiences on twenty-two different aspects of grief.

Although diverse in their ages, religions, experiences, and professions, these grieving mothers and their NICU nurse share their intensely personal stories in ways that create an incredibly universal book that will speak to readers from all walks of life. Parents who grieve the loss of a baby will find validation, hope, and consolation. Those trying to assist a loved one who has lost a baby will find understanding about parental grief and will be empowered to more effectively help their loved one experiencing this unique type of grief.

Victoria Leland, RN, earned her Bachelor of Science Degree in Nursing from the University of the Incarnate Word in San Antonio, Texas. She practiced as a hospital bedside nurse for twenty-seven years, twenty of which were in Neonatal Intensive Care. She is an accomplished photographer and has completed two national traveling photo exhibits for the March of Dimes. She is the mother of a prematurely born child and also the author of The Work of Your Hand: Christian Meditations for Parents of Critically Ill Babies in Neonatal Intensive Care.

Linda Bailey, an accountant by profession, found her life turned upside down very unexpectedly when her twins arrived sixteen weeks prematurely. Madison lived two days, and Kaitlyn survived a difficult four-month journey in the NICU. Linda experienced a complicated form of grief as she rejoiced in the miraculous survival of one daughter, while profoundly grieving the loss of her beloved second daughter. Linda's search for healing led her to a group of other grieving mothers and her NICU nurse, with whom she journaled and became extremely active in community volunteerism.

Audra Fox-Murphy was a young bank teller and newly married military wife when her son Gabriel was born. All her lovely dreams of building a family came crashing down when her son arrived fifteen weeks early. When Gabriel died at sixty-seven days of age, Audra was left devastated. Her search for healing led her to a group of other NICU moms who were grieving the loss of their babies. She found great comfort as they shared structured journaling, deep discussions, tears, laughter, and time together doing meaningful community service projects that honored the memories of their beloved babies.

Heather Gray, a highly successful software engineer, was a first time mother when her son Connor was born. He arrived sixteen weeks prematurely and passed away at twenty days of age. Leaving the NICU without Connor left Heather's world and dreams shattered. After much searching, she found solace for her grief most effectively when she journaled, forged friendships, and did community service projects with her NICU nurse and other grieving NICU mothers.

Allison Guild, a middle school Special Education teacher by profession, was a first-time mother when her son Brennen was born. He arrived twelve weeks prematurely and passed away in the NICU at nine days of age. Left with a broken heart, Allison's search for healing led her to a group of other grieving mothers gathered together by her NICU nurse, with whom she journaled (using her love of analogies to write about her grief) and became involved in community volunteerism projects that honored Brennen's life.

Sahnewaz (Tania) Hossain, a telecommunications customer service rep, is a native of Bangladesh. Her third daughter, Lanika, was born three months early and spent several months in a NICU before she succumbed to complications of prematurity and died. In the wake of Lanika's death, Tania, her husband, and two elementary aged daughters struggled immensely with their shattered family dreams and profound grief. Tania's search for healing found real solace in the welcoming friendships of other grieving mothers and their NICU nurse, with whom she met regularly and journaled. In her lovely English-as-a-second-language way, Tania found expression for her sorrow and true strength for her grief journey.

Tear Soup A Recipe for Healing after Loss

Tear Soup A Recipe for Healing After a Loss

The Catholic Way to Pray booklets A Guide to Quiet Prayer

A Healing Year Daily Meditations for Living with Loss

A Homemade Year The Blessings of Cooking, Crafting, and Coming Together

A Month of Mondays Spiritual Lessons from the Catholic Classroom