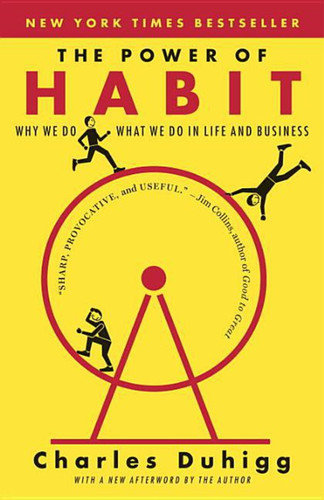 The Power of Habit: Why We Do What We Do in Life and Business

subtitle:
Why We Do What We Do in Life and Business
paperback:
true
min:
$13.60
title:
The Power of Habit

NEW YORK TIMES BESTSELLER - This instant classic explores how we can change our lives by changing our habits.

In The Power of Habit, award-winning business reporter Charles Duhigg takes us to the thrilling edge of scientific discoveries that explain why habits exist and how they can be changed. Distilling vast amounts of information into engrossing narratives that take us from the boardrooms of Procter & Gamble to the sidelines of the NFL to the front lines of the civil rights movement, Duhigg presents a whole new understanding of human nature and its potential. At its core, The Power of Habit contains an exhilarating argument: The key to exercising regularly, losing weight, being more productive, and achieving success is understanding how habits work. As Duhigg shows, by harnessing this new science, we can transform our businesses, our communities, and our lives.

Prologue: The Habit Cure -- Part 1. The Habits of Individuals -- 1. The Habit Loop: How Habits Work -- 2. The Craving Brain: How to Create New Habits -- 3. The Golden Rule of Habit Change: Why Transformation Occurs -- Part 2. The Habits of Successful Organizations -- 4. Keystone Habits, or the Ballad of Paul O'neill : Which Habits Matter Most -- 5. Starbucks and the Habit of Success: When Willpower Becomes Automatic -- 6. The Power of a Crisis: How Leaders Create Habits Through Accident and Design -- 7. How Target Knows What You Want Before You Do: When Companies Predict (and Manipulate) Habits -- Part 3. The Habits of Societies -- 8. Saddleback Church and the Montgomery Bus Boycott: How Movements Happen -- 9. The Neurology of Free Will: Are We Responsible for Our Habits? -- Afterword: Some Things Learned About Weight Loss, Smoking, Procrastination, and Teaching -- Appendix: A Reader's Guide to Using These Ideas -- Acknowledgments -- A Note on Sources -- Notes -- Index.

With a new Afterword by the author

Few [books] become essential manuals for business and living. The Power of Habit is an exception. Charles Duhigg not only explains how habits are formed but how to kick bad ones and hang on to the good.

Entertaining . . . enjoyable . . . fascinating . . . a serious look at the science of habit formation and change.

A fresh examination of how routine behaviors take hold and whether they are susceptible to change . . . The stories that Duhigg has knitted together are all fascinating in their own right, but take on an added dimension when wedded to his examination of habits.

There's been a lot of research over the past several years about how our habits shape us, and this work is beautifully described in the new book The Power of Habit.

A first-rate book--based on an impressive mass of research, written in a lively style and providing just the right balance of intellectual seriousness with practical advice on how to break our bad habits.

I have been spinning like a top since reading The Power of Habit, New York Times journalist Charles Duhigg's fascinating best-seller about how people, businesses and organizations develop the positive routines that make them productive--and happy.

An absolutely fascinating . . . book [that explores] a startling and sometimes dismaying collision between the increasingly sophisticated scientific understanding of habits--how they're formed, how they can be disrupted and changed--and, among other things, companies' efforts to use that knowledge to steer your habits and money their way.

The Power of Habit is chock-full of fascinating anecdotes . . . how an early twentieth century adman turned Pepsodent into the first bestselling toothpaste by creating the habit of brushing daily, how a team of marketing mavens at Procter & Gamble rescued Febreze from the scrapheap of failed products by recognizing that a fresh smell was a fine reward for a cleaning task, how Michael Phelps' coach instilled habits that made him an Olympic champion many times over, and how Tony Dungy turned the Indianapolis Colts into a Super Bowl-winning team.

David Allen, bestselling author of Getting Things Done: The Art of Stress-Free Productivity

You'll never look at yourself, your organization, or your world quite the same way.

Charles Duhigg is an investigative reporter for The New York Times. He is a winner of the National Academies of Sciences, National Journalism, and George Polk awards, and was part of a team of finalists for the 2009 Pulitzer Prize. He is a frequent contributor to This American Life, NPR, PBS NewsHour, and Frontline. A graduate of Harvard Business School and Yale College, he lives in Brooklyn with his wife and two kids .

Christ in Crisis Why We Need to Reclaim Jesus

Why Do We Have to Be So Quiet in Church? and 12 Other Questions Kids Have About God

What Matters Most Empowering Young Catholics for Life's Big Decisions

Now What Do I Do? A Guide to Help Teenagers with Their Parents' Separation or Divorce

The Power of Moments Why Certain Experiences Have Extraordinary Impact

Made to Stick Why Some Ideas Survive and Others Die

Switch How to Change Things When Change Is Hard