Eight Whopping Lies and Other Stories of Bruised Grace 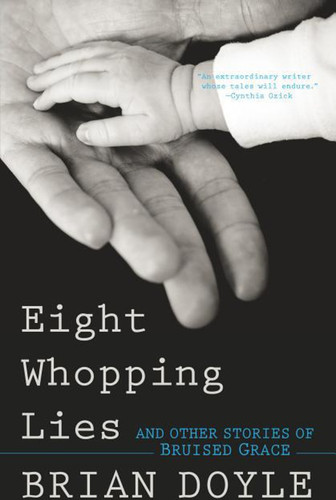 Eight Whopping Lies and Other Stories of Bruised Grace

This is a guided tour through the mind of one of the most acclaimed voices in contemporary Catholic writing. Brian Doyle effortlessly connects the everyday with the inexpressible and consistently marries searingly honest prose with interruptions of humor and humanity.

These essays bear Doyle's trademark depth and deliver with eloquence his piercing observations on mohawks and miracles, vigils and velociraptors, syntax and scapulars, jail and jihad, and mercy beyond sense.

"[The author] effortlessly connects the everyday with the inexpressible and consistently marries searingly honest prose with interruptions of humor and humanity. These essays bear Doyle's trademark depth and deliver with eloquence his piercing observations on mohawks and miracles, vigils and velociraptors, syntax and scapulars, jail and jihad, and mercy beyond sense" --Back cover.

Brian Doyle wrote more powerfully about faith than anyone in his generation. In the literary climate of the present time, to write about faith is a brave and original and contrary thing to do. Never didactic or overbearing, he showed us occurrences in life that burst with radiance-- small epiphanies with enormous implications. And best of all, he could sneak up on you and really make you laugh. These are wonderful essays by a writer whose work will last and whose reputation will grow. -- Ian Frazier, author of Great Plains and Lamentations of the Father

If a life can be said to be a collection of moments, then Brian Doyle's life is right here, glowing between the covers of this book. Each of these thirty-eight essays presents a little moment that, upon reflection, is everything but little. They are the memories and thoughts of a man who made it his purpose in life to recognize kindness, humor, grace, and beauty whenever he saw it. Bruised Grace will make you a better person. -- Anthony Doerr, author of All the Light We Cannot See

Almost nobody has written with the joy, the galloping energy, the quiet love of conscience and family and what's best in us, the living optimism of Brian Doyle. He was one of the most generous and imaginative editors in America for decades, helping to fashion a magazine that was uniquely elegant and transformative. But he was also a writer--on faith and life and Van Morrison and fathers and sons and everything essential--it's hard to imagine our seeing again. What a gift to have his beautiful and refulgent spirit with us again between the covers of a new book! -- Pico Iyer, author of The Open Road and The Art of Stillness

Brian Doyle's prose was lean and rhythmic while also being ornate in the way a branch is ornate when it's covered with green leaves. His poetry was that only moreso, beating like a bodhran, but his message was pretty much always the same. An examination of small moments. The search for what he called "grace." He also happens to be the best basketball writer I've ever read. Basketball exposed to me just how hard Brian could go, how determined he was. When I finally got to America in 2015, I found him walking with a limp. Old basketball injury, he said with a grin. As a writer, as a man, I thought he was a brave, generous spirit. I thought of him as my American brother. -- Martin Flanagan, author of 16 books, the last of them being On Listening (Penguin)

Pope Francis Takes the Bus, and Other Unexpected Stories

The First Christmas Tree and Other Stories