Eager to Love The Alternative Way of Francis of Assisi 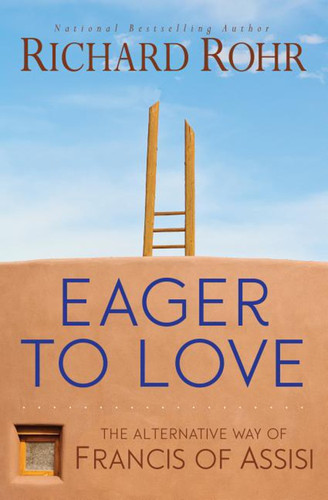 Eager to Love: The Alternative Way of Francis of Assisi

Globally recognized as an ecumenical teacher, Richard Rohr started out--and remains--a Franciscan friar. The loving, inclusive life and preaching of Francis of Assisi make him a recognizable and beloved saint across many faith traditions. He was, as Rohr notes, "a master of 'making room for it' and letting go of that which was tired or empty."

Francis found an "alternative way" to follow Jesus, one that disregarded power and privilege and held fast to the narrow path of the Gospel. Rohr helps us look beyond the birdbath image of the saint to remind us of the long tradition founded on his revolutionary, radical, and life-changing embrace of the teachings of Jesus.

From the America magazine interview with Richard Rohr:

Why another book on St. Francis when there is already so much on him?
Well, first of all it isn't a biography on St. Francis, and I don't really talk about him until one of the later chapters. I make that point at the beginning. My emphasis in the book is on what flowed from him, what was validated by him and then toward the end of the book I look at the source: Francis himself. Francis was not a theologian, much less a systematic theologian. But he was an intuitive genius, at least in terms of spiritual things and the gospel.

Who are you writing for?
I would say interested but sincere seekers. I don't care if they're in the church or out of the church. I would like to believe that interested but sincere seekers, probably with some degree of education, will read it. Some of the chapters are quite heavy; the one on contemplation is really central. People who haven't done a little homework in these fields will probably jump over some of these heavier chapters because it might be too much for the common reader. I worried about that a bit because I don't want to write for the elite, but neither do I want to make Francis into a lightweight as he's so often been portrayed. So I guess I'm shooting at the middle.

What does the title "Eager to Love" mean for you?
As I began writing it, I was wondering what I would title it, and then in reading Bonaventure--Bonaventure is the philosopher-theologian who takes Francis' intuitive vision and makes a systematic theology and philosophy out of it--is where I found it. In my reading of Bonaventure, I don't remember if he actually uses that phrase, but whatever phrase I was reading prompted that image. What Bonaventure saw in Francis and what he desired in himself was an eagerness to love. It wasn't just an intellectual head trip that the gospel for both Francis and Bonaventure was immediately oriented toward love and service in the world. And love of the world and service toward the world. So the phrase came to me and I never changed it after that. The publishers liked it and it stuck.

Francis found an alternative way to follow Jesus, one that disregarded power and privilege and held fast to the narrow path of the Gospel. Rohr helps us look beyond the birdbath image of the saint to remind us of the long tradition founded on his revolutionary, radical, and life-changing embrace of the teachings of Jesus"--Amazon.com.Fr. Richard Rohr is a globally recognized ecumenical teacher bearing witness to the universal awakening within Christian mysticism and the Perennial Tradition. He is a Franciscan priest of the New Mexico Province and founder of the Center for Action and Contemplation (CAC) in Albuquerque, New Mexico. Fr. Richard's teaching is grounded in the Franciscan alternative orthodoxy--practices of contemplation and lived kenosis (self-emptying), expressing itself in radical compassion, particularly for the socially marginalized. Fr. Richard is the author of numerous books, including Everything Belongs, Adam's Return, The Naked Now, Breathing Under Water, Falling Upward, Immortal Diamond, and Eager to Love: The Alternative Way of Francis of Assisi. Fr. Richard is academic Dean of the Living School for Action and Contemplation. Drawing upon Christianity's place within the Perennial Tradition, the mission of the Living School is to produce compassionate and powerfully learned individuals who will work for positive change in the world based on awareness of our common union with God and all beings. Visit cac.org for more information.

Francis of Assisi is one of the most beloved of all saints. Both traditional and entirely revolutionary, he was a paradox. He was at once down to earth and reaching toward heaven, grounded in the rich history of the Church while moving toward a new understanding of the world beyond.

Rohr draws on Scripture, insights from psychology, and literary and artistic references, to weave together an understanding of the tradition as first practiced by St. Francis. Rohr shows how his own innovative theology is firmly grounded in the life and teaching of this great saint and provides a perspective on how his alternative path to the divine can deepen and enrich our spiritual lives.

Eager to Love illuminates the path of Francis of Assisi as a path of evolving life toward integral wholeness.

A gift to all Franciscan-hearted people everywhere!

Daniel P. Horan, O.F.M., author, The Last Words of Jesus: A Meditation on Love and Suffering

This book captures the essence of our Franciscan spirituality. Richard has woven a masterful tapestry that combines ancient sources with cutting edge experience and thought. He writes with the authority of a man who has faithfully embraced our life for over half a century, an authentic mystic drawing on his own experience. This book may indeed help re-ignite the Franciscan revolution in our 21st Century.

A marvelous, companionable book for those eager to love as Francis and Clare loved. Both philosophical and experiential, theological and historically based, Eager to Love is itself a chronicle and sustained meditation on how Friar Richard has come to understand and live the Franciscan life he vowed as a young man. It is a wisdom book packed with insight, compassion, and love - a mellowing and deepening of a modern prophetic voice.

Ever since the current pope took the name Francis, interest in the life and message of Francis of Assisi has grown exponentially. Rohr (Silent Compassion), a Franciscan priest and director of the Center for Action and Contemplation, examines the life of Francis of Assisi, God's "holy fool." This is not a biography, however, but rather an examination of themes in Francis's ministry that can help inspire and motivate contemporary people of faith. Francis focused primarily on loving and being in solidarity with the poor, suffering, and outcast. His outwardly focused spirituality does not emphasize pursuing personal piety. In this way, the author posits that Francis serves as a "corrective" for those who are exceedingly pious or think they can forge their own path to God without community involvement. Simplicity is another key theme in Francis' spirituality: simplicity involves placing oneself outside of financial and consumerist desires that offer a false sense of freedom. This Franciscan message is sorely needed in the world, and Rohr's masterful exposition of its treasures offers spiritual salve.

In Eager to Love, [Rohr] reclaims the mysticism inherent in the Franciscan legacy and he offers it as an alternative to the hierarchical, patriarchal and authoritarian Christianity that he suggests has primary responsibility for so much of contemporary agnosticism in the West. ... He claims to want to "reignite the Franciscan revolution," which is universally accessible and inclusive, offering healing and liberation. As such, he is building a bridge between the Christian mystical tradition and estranged seekers of every ilk. ... Eager to Love is neither a biography of Francis nor a history of the Franciscan order, but Rohr's reflections on the best aspects of the Franciscan heritage as lived out by its founder and its early worthies -- Clare, Bonaventure and Dun Scotus.

Advent and Christmas Wisdom from St. Francis of Assisi

Pope Francis, the Family, and Divorce In Defense of Truth and Mercy