American Catholic Experience A History from Colonial Times to the Present 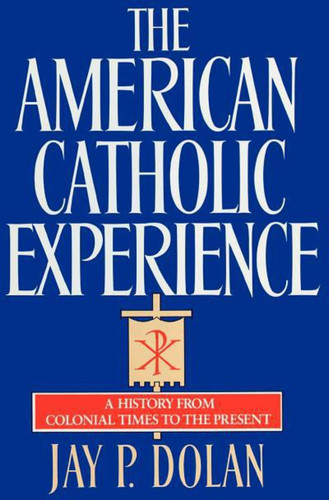 American Catholic Experience: A History from Colonial Times to the Present

Catholicism has had a profound and lasting influence on the shape, the meaning, and the course of American history. Now, in the first book to reflect the new communal and social awakening which emerged from Vatican Council II, here is a vibrant and compelling history of the American Catholic experience.

Spanning nearly five hundred years, the narrative eloquently describes the Catholic experience from the arrival of Columbus and the other European explorers to the present day. It sheds fascinating new light on the work of the first vanguard of missionaries, and on the religious struggles and tensions of the early settlers. We watch Catholicism as it spread across the New World, and see how it transformed--and was transformed by--the land and its people. We follow the evolution of the urban ethnic communities and learn about the vital contributions of the immigrant church to Catholicism. And finally, we share in the controversy of the modern church and the extraordinary changes in the Catholic consciousness as it comes to grips with such contemporary social and theological issues as war and peace and the arms race, materialism, birth control and abortion, social justice, civil rights, religious freedom, the ordination of women, and married clergy.

The American Catholic Experience is not just the history of an institution, but a chronicle of the dreams and aspirations, the crises and faith, of a thriving, ever-evolving religious community. It provides a penetrating and deeply thoughtful look at an experience as diverse, as exciting, and as powerful as America itself.

Amazing Graces The Blessings of Sacramentals

Always Discerning An Ignatian Spirituality for the New Millennium

American Catholic Experience Finding My Way in a Grace-Filled World

Alter Girl Walking Away from Religion into the Heart of Faith

All Saints All Souls Bulletin Inserts/Handouts

An Anthology of Saints …official, unofficial, and should-be saints