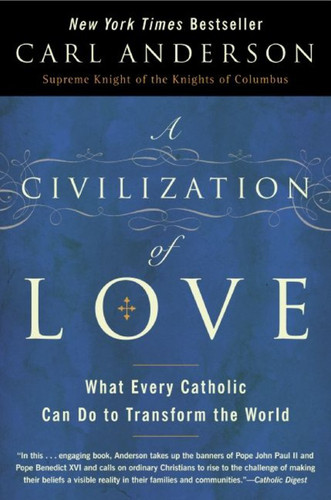 A Civilization of Love: What Every Catholic Can Do to Transform the World

subtitle:
What Every Catholic Can Do to Transform the World
paperback:
true
min:
$12
title:
A Civilization of Love
pricing:
$12 - $13.50

Carl Anderson, Supreme Knight of the Knights of Columbus, surveys the history-changing ideas of Pope John Paul II and Pope Benedict XVI, and brings a message of inclusion and hope in the midst of a battle between the culture of death and the culture of life, providing a road map to help Christians understand their role in the world.

A bracing call to a new American revolution: a revolution of virtue. Give this book to friends who say there’s nothing to be done to heal a wounded culture.

Few elements of Catholic social teaching have been more forcefully stated, or more regularly ignored, than our calling to bring Christian teachings to bear on social, political, and economic issues. Anderson seeks to bring that message home.

Anderson has written a book brimming with insights into the transforming power of Christian faith. A Civilization of Love is both a call to personal holiness and a handbook for Catholics who are prepared to take seriously Christ’s command to his disciples to be ‘salt and light’ in the world.

By embracing the culture of life and standing with those most marginalized . . . Christians can change the tone and direction of our culture. Anderson demonstrates that we can come together on the centrality of loving and caring for others

What Every Catholic Needs to Know about Marriage, Divorce, Nullity and Remarriage

Can We Save the Catholic Church?

Can We Save the Catholic Church?