The Life of St. Thérèse of Lisieux The Original Biography Commissioned by Her Sister 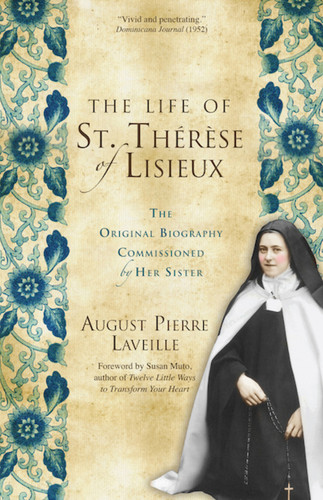 The Life of St. Thérèse of Lisieux: The Original Biography Commissioned by Her Sister

subtitle:
The Original Biography Commissioned by Her Sister
paperback:
true
min:
$15.16
title:
The Life of St. Thérèse of Lisieux

This remarkable biography of Thérèse of Lisieux, one of the most popular Catholic saints of all time, was commissioned by her sister and religious superior and was the first published in English in 1928. Msgr. August Pierre Laveille was able to portray Thérèse, as well as her parents Zélie and Louis who were canonized in 2015, with exquisite detail, having interviewed those who knew them best.

When the autobiography of the life of Thérèse of Lisieux, Story of a Soul, was first published a year after her death in 1898, the response was immediate and overwhelming, with tens of thousands of copies of her book sold in just a few short months. It was decided that an official biography should be written from the documents that had been gathered on the life of Thérèse Martin, whose cause for canonization was taken up without the customary fifty year waiting period.

First published in French in 1925, the first English edition became available in 1928. This exhaustive record of the life of one of the most beloved of all Catholic saints includes biographical information about her parents and grandparents, her early years at home, her years in the cloister, her illness and death, and information about the miracles attributed to her after her death, when she made good the promise on her deathbed that she would “spend her heaven doing good on earth.”

Once again the vivid and penetrating biography of this luminous soul by Msgr. Laveille is made available.  …  Msgr. Laveille has drawn back the curtain and shown us the beauty of this soul as seen from without. Many details not mentioned by the Saint herself, either out of humility or not considered as coming under the scope of the work commanded by her superiors, are here seen for the first time. A detailed account of her early childhood and family life are given. It at once becomes evident where the seeds were planted which were to bloom forth so gloriously and thus illuminate the path for other little souls to follow.

What is it that accounts for the perennial appeal of this gem of a biography, which is at once both timely and timeless? The author shows how simple, childlike souls, like that of Thérèse, bring superior intelligence to bear on the truths of faith.

This new edition of Msgr. Laveille’s biography of St. Thérèse of Lisieux is a welcomed addition to the literature about her because it offers a window into how Thérèse was presented to the world at the time of her canonization.

Maureen O’Riordan
Curator of Saint Therese of Lisieux: A Gateway
×

Advent and Christmas Wisdom from St. Thérèse of Lisieux

The Life and Legacy of Saint Marianne Cope, OSF

The Liturgy of the Word with Children

The Little Angels Book of Prayers

The Little Flowers of Saint Francis

The Long Yearning's End - Paperback Stories of Sacrament and Incarnation

The Life of St. Paul

The Light of the World Daily Meditations for Advent and Christmas

The Long Yearning's End - Hardcover Stories of Sacrament and Incarnation