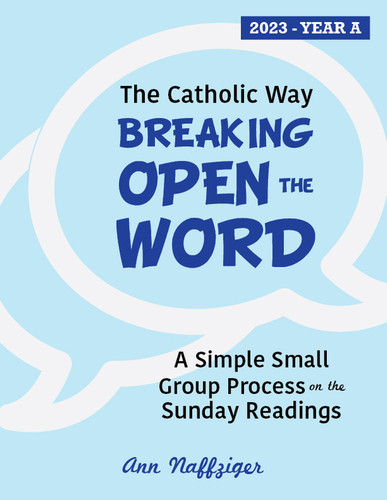 [The Catholic Way] Breaking Open the Word 2023 (eResource): A Simple Yet Powerful Two-Page Per Week Process

A bargain at only $1 per week for unlimited copies!

Beginning with Advent 2022 and continuing through Christ the King 2023.

Finally, here is a simple yet powerful process for leading small group reflection on the Sunday Lectionary readings.  Other processes can be overwhelming and simply too much content for a small group session, expecially for the limited time you have for an RCIA dismissal period.  These Breaking Open the Word sessions focus on a single reading each week, with insightful daily life commentary and related discussion questions.

Ann Naffziger brings her decades of experience in small group facilitation, spiritual direction, and leading RCIA into this resource centered on conversion and discipleship.

A two-page handout is provided for each week, which includes:

Peek inside!
This is a downloadable, reproducible product sold with a one year parish or school license. Please read the full license terms below.

Jean Denton is a cartoonist, illustrator and journalist. Her “Flock” cartoons were featured in the North Texas Catholic newspaper for more than 25 years. They’ve also run in a few other Catholic papers, magazines, and resources. Besides drawing The Flock, Jean has been a Catholic newspaper reporter, columnist, and illustrator. A veteran parish catechist, former youth minister, wife, and mother of three adult children, she holds a certificate in Christian spirituality from Loyola University of New Orleans.

Thank God For Grandparents Activities & Memories for My Grandparent & ME!