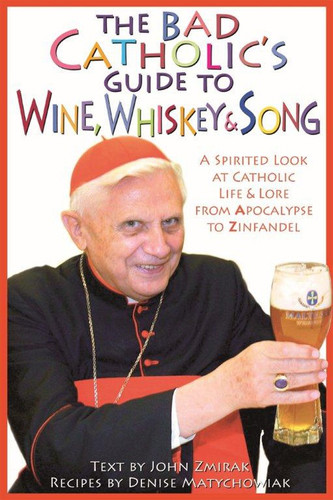 National bestseller! An intelligent and church-loving vade mecum to the Catholic faith that explains the difference between God and vodka, and why Benedictines make the best beer. With games, rollicking drinking songs, and food and cocktail recipes.

Why is it that so many liquors were invented by Catholic monks? How did the Church save wine making from barbarian and Saracen invasions? Beyond the obvious link between wine and the Holy Mass, there’s a long and loving connection between the Spirit and tasty spirits.

This book tells the story of the Church on four continents, using each country’s national drink as the “window” on the lives of saints, sinners, soldiers, and scholars who built up Catholic culture from California to Patagonia.

The authors prove that irreverence is compatible with true piety as they gallop through Catholic ideas, anecdotes . . . and recipes. The book often rises to the level of laugh-out-loud funny and observes the Catholic scene with wit and insight.

Chesterton remarks somewhere that a Protestant typically says he is a good Protestant while a Catholic typically says he is a bad Catholic. Two young Catholics who manifestly love the Church make the most of that, offering a frequently hilarious, sometimes sophomoric, romp through the church year, the legends of the saints, and the oddments of Catholic sacramental practice. Recipes for the celebration of feasts and fantasies abound. The book will not be everybody’s cup of tea—or, more aptly, pint of ale—but those who like this kind of thing will undoubtedly like it very much."

John and Denise, a long-time Catholic journalist and a trained Continental chef, have done it again. They’ve ransacked 20 centuries, 5 continents, and their own disturbed imaginations to uncover the fun in faith—and dozens of delicious recipes for dinner, cocktails, and party punch. It’s educational—and intoxicating!

Among the many memorable recipes are Smothered Squirrel, Easter Bunny Fricassee, Baby Jesus Cookies, Greek Flaming Cheese, Feta Cheese Cigarettes and Nun’s Farts, a deep-fried pastry-type confection. And frankly, if reading the words “Nun’s Farts” didn’t make you giggle, at least a little bit, then you’re probably not part of the demographic for this offbeat, entertaining book.

A sharp, loving excavation of Things Catholic via a trip through the liturgical year—and recipes . . . It’s heartfelt, satirical, and, we can’t neglect to say, accurate in its presentation of the faith.

The ideas outlined here for food and fun are zany, sophisticated, and delightful! How many guides to seasonal cooking urge their readers to flambé chickens, smother squirrels, put antidepressants in the punch and sell indulgences? Not nearly enough, if you ask me.

Bad Catholics, beware. John Zmirak and Denise Matychowiak have a hidden agenda: to make you better Catholics. Beneath the puns, ribaldry, and hilariously apt (and no doubt delicious) feast-day recipes lie a profound reverence for—and knowledge of—the Church, her saints, her teachings, and her traditions.

It isn’t often that a book comes along that forces you to laugh as hard as it makes you believe—Mr. Zmirak and Miss Matychowiak have produced such a book. It is irreverent all right, but not toward Catholicism. Instead, it is a book that laughs its head off at the crazy world around us that denies the Faith. Because they believe in the Catholic religion, the authors feel no need to pretend belief in anything else—and everything comes in for a skewering, from modern notions of respectability to sheer bad taste. But mixed in with the banter is solid Church teaching, history, and custom. Oh yes—and the food and drink recipes are delicious. Brings home Belloc’s dictum that 'wherever the Catholic sun doth shine, there’s laughter and music and good red wine.' This book reminds us that where it doesn’t, there aren’t.

Charles A. Coulombe, KCStS, author of Vicars of Christ: A History of the Popes.

The Bad Catholic's Guide to Wine, Whiskey and Song is the rarest of things—a successful sequel. From A to Z, Zmirak runs through the most well-stocked liquor cabinet imaginable, tracing every form of spirit and elixir back to its Christian origin. In the finest of traditions, he also provides drinking songs, the funniest being Monty Python’s “Philosopher Song” reworked to feature heretics . . . Deep faith and great intelligence provide ballast for what seems to be Christendom’s first stand-up comic.

John Zmirak is an editor, college teacher, screenwriter, and political columnist.  He is author of the popular Bad Catholic’s Guides, Wilhelm Röpke, and The Grand Inquisitor(graphic novel). He is a former editor at Investor’s Business Daily. His work has appeared in Aleteia.org, The Blaze, National Review, The Weekly Standard, First Things, The American Spectator, USA Today,  Commonweal, The American Conservative, and The National Catholic Register; and he has contributed to The Encyclopedia of Catholic Social Thoughtand American Conservatism: An Encyclopedia.  He has been a commentator on Fox News and the Christian Broadcasting Network. He edited a number of popular guides to higher education, and served as press secretary to Louisiana Governor Mike Foster.

View all resources by John Zmirak

The Divorced Catholic's Guide to Parenting

The Everyday Catholic's Guide to the Liturgy of the Hours

The Bells of Christmas

The Beatitudes of Peace Meditations on the Beatitudes, Peacemaking and the Spiritual Life

The Baby in Mommy's Tummy

The Best Is Yet to Be A Retreat for Older Adults

The Blessing of the Beasts