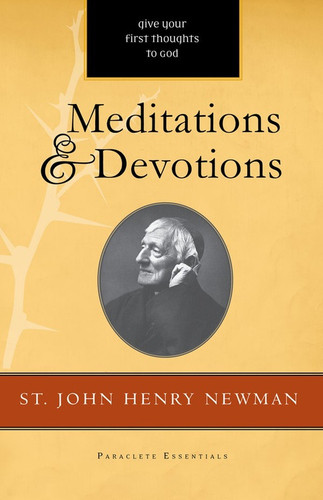 SKU:
UPC:
Availability:
Publication is planned to time with the canonization of Newman on October 13, 2019
Bulk Pricing:
Buy in bulk and save

Newman’s Meditations and Devotions was first published in 1893, three years after his death. The great 19th century priest, writer, convert, and cardinal had long wanted to compose a book of devotions that might be used on a calendar basis, but that project never materialized during his lifetime. After his death, his literary executor compiled the meditations and devotions here, all of which were part of Newman’s daily spiritual practice. New to this edition: beautiful original illustrations to accompany Newman's meditations on the Stations of the Cross.

John Henry Newman (1801-1890) was a poet and theologian. He was first an Anglican priest and founder of the Oxford Movement, and later became a Catholic priest and cardinal. His autobiography Apologia Pro Vita Sua is one of the great Christian classics.

Easter Meditations on the Resurrection

Alter Christus Meditations for Priests on the Words of St. Paul

Realizations Newman's Own Selection of His Sermons