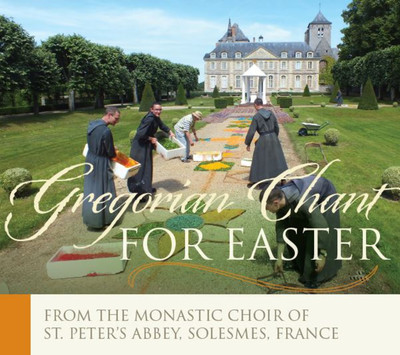 SINCE 1833, the research and study of Gregorian Chant by the Monks of the Abbey of St. Peter in Solesmes, France, has focused on making this sung form of prayer the finest possible offering for God, to whom it is addressed six times a day at the Abbey.

These recordings include Introits, Graduals, Alleluias, Sequences, Offertories, Communions, and Hymns from Easter Mass, and the Mass for the First Sunday after Easter as well a Hymn from the Masses of Eastertide and the seven Antiphons of the Resurrection according to the Gospels.

Written by The Monastic Choir of St. Peter's Abbey of Solesmes

Paraclete Press offers a superb list of outstanding Christian music which is magnificently performed by the monks of Solesmes. Each of these highly recommended exceptional recordings is flawlessly produced and showcases centuries of devotions, chants, celebrations, and the glorification of God.—Reviewer's Bookwatch

The Chants of Christmas Gregorian Chant

Music for Holy Week and the Easter Season

Great Expectations A Pastoral Guide for Partnering with Parents

Grieving the Sudden Death of A Loved One

Greatest Heroes and Legends of the Bible The Complete Series