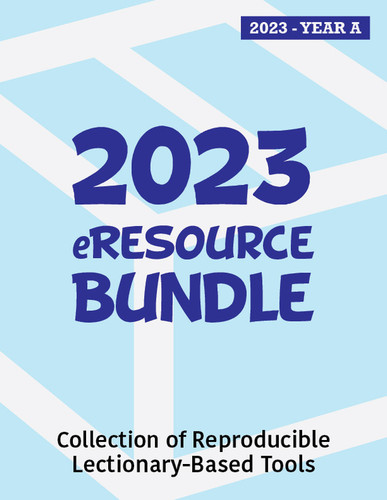 Get over 25% off these English language resources when buying them together!

Beginning with Advent 2022 and continuing through Christ the King 2023.

Purchase this collection of seven downloadable, reproducible 2023 Year A resources and share them with your entire pastoral team and community. You can make unlimited copies of these resources and use them in many areas of parish life. Click on the resource name to preview and learn more about each title.

This is a downloadable, reproducible product sold with a one year parish or school license. Please read the full license terms below.

Jean Denton is a cartoonist, illustrator and journalist. Her “Flock” cartoons were featured in the North Texas Catholic newspaper for more than 25 years. They’ve also run in a few other Catholic papers, magazines, and resources. Besides drawing The Flock, Jean has been a Catholic newspaper reporter, columnist, and illustrator. A veteran parish catechist, former youth minister, wife, and mother of three adult children, she holds a certificate in Christian spirituality from Loyola University of New Orleans.

Bestselling author and spiritual writer FR. DAVID KNIGHT, who passed away in 2021, brought to his writing a varied background as a missionary, teacher, pastor, professor, retreat director, and campus minister. His landmark book, His Way: An Everyday Plan for Following Jesus, is used in diocesan renewal programs throughout North America. He has written for publications including U.S. Catholic, Marian Helper, The Sign, America, and Common Sense. Father Knight's ministry lives on through the nonprofit Immersed in Christ, based in Germantown, TN.

Thank God For Grandparents Activities & Memories for My Grandparent & ME!