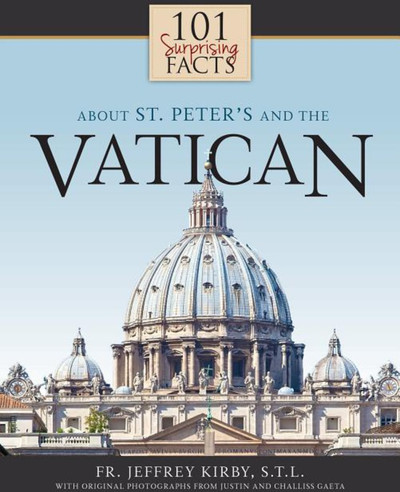 What do you really know about Vatican City?

The Vatican, comprising the Apostolic Palace, St. Peter's Basilica, and various other buildings, serves as the headquarters of the Catholic Church. It has done so for nearly two millennia -- ever since the first Pope, St. Peter, made it his home.
Thousands of Catholics flock to the Vatican and its iconic basilica each year. Even if you haven't visited you've likely watched with bated breath for smoke to rise from behind the cupola during the election of a new pope, or have laid eyes on the new pontiff when he emerged from the balcony for the first time.

Thousands of Catholics flock to the Vatican and its iconic basilica each year. But what do you really know about this great basilica and the city that houses it? Here, Father Jeffrey Kirby takes you on a whirlwind tour of this little country (yes, Vatican City is its own country, Fact # 2) and uncovers the secrets and surprising facts about the city, and its famous church.

Whether you've already been to Rome or are still planning your first trip, 101 Surprising Facts About the Vatican will transport you to Basilica and City at the heart of the Catholic Church -- and enable you to appreciate them like never before.

Peek inside!
Written by Jeffrey Kirby and Justin Gaeta

Father Jeff Kirby is a priest of the Diocese of Charleston. He holds a Licentiate in Moral Theology from the Holy Cross University in Rome. As the diocesan Vicar of Vocations for the past several years, Fr. Kirby has guided numerous young men and women in the spiritual life and in the process of discernment. Drawing on these experiences, he wrote the book Lord, Teach Us To Pray. In 2011, he founded the Drexel House, a Catholic Residence for Men.

Meditation - Instrumental Music for Prayer and Reflection Cello and Harp